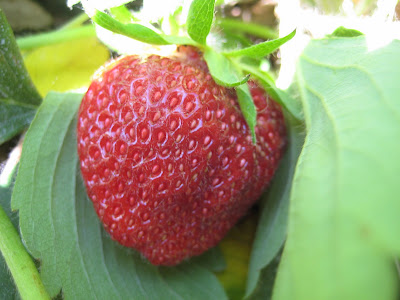 I picked a bowl of strawberries at Dan's Farm on Saturday, and after we froze some and ate some more, I decided to make the Strawberry Rhubarb Fool recipe from my Fresh cookbook. 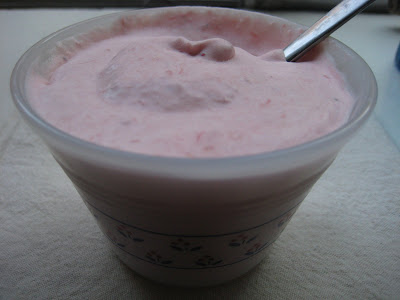 The crazy simple recipe goes something like this: simmer a cup of chopped rhubarb with a half cup of water and a half cup of sugar for 20 minutes. Add a cup of strawberries for five more minutes. Blend. After cooling, fold into two cups of whipping cream that you whipped during the simmering. Cool some more.

The fool was super tasty, but I felt strange eating what is essentially a bowl of whipped cream; it felt both too indulgent and not indulgent enough. Next time I think I will serve it with a piece of angel food cake. I also wonder how it would work in an Icebox Cake, but I'm not sure if I'm willing to find out.

i suggest making half as much whipping cream and spooning half of the rhubarb and strawberry goo (pre blended) into cups and then adding the rest of the 'fool' on top. it feels like eating a bowl of jam and whipped cream instead of just a bowl of cream.

I am so making this tomorrow to go with the strawberries and dumplings that were on Smitten Kitchen today. I think that would work perfectly with your idea to serve it with cake, and Deb's idea to serve the dumplings with cream. YESS!!!

PS my fool kind of sucked. Did yours curdle? It was still nice on the strawb and dumplings.

Mine didn't curdle. Maybe you need to cool the rhubard and strawberry mixture a little more. Even so, that's great that you made those dumplings!