We drive a lot whenever we visit Saskatchewan (noteworthy since we don't own our own car in Victoria). These are some of the winter views we've recently enjoyed from my parents' car: 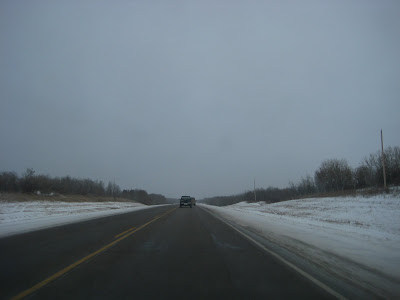 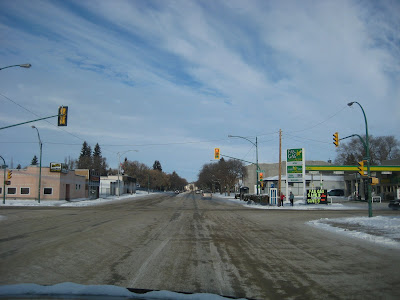 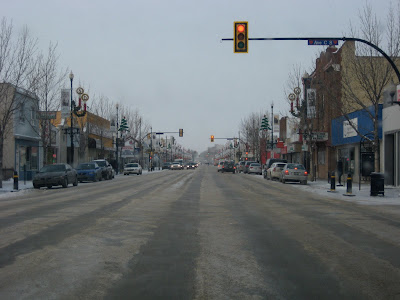 Posted by Erin Riley at 3:23 pm No comments:

I've seen a few videos via Color Me Katie, and I always enjoy them more than I expect. The most recent video, Guerrilla Handbell Strikeforce, is so simple and sweet. A choir of undercover agents with handbells join a Salvation Army bell ringer one at a time, play a carol together, and leave the same way:

Even though I've enjoyed the videos I've come across, I didn't become an official fan until I heard the founder, Charlie Todd, interviewed on This American Life. The Mind Games episode explores the psychological impact of a couple of the group's stranger missions. It's one of the best TAL episodes I've ever heard - high praise indeed. 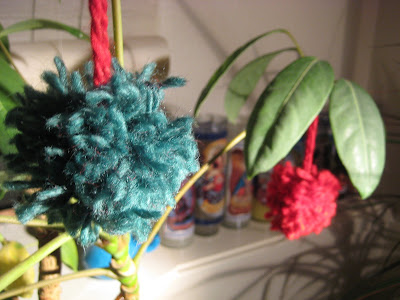 The motivation to craft has been lacking lately, but last Friday I became obsessed with making pom poms. I started out by making a DIY donut-shaped tool out of two pieces of cardboard, but I quickly abandoned all that for an easier method. I wrapped the yarn around my fingers, tied the bunch together and cut the loops. This video will show you what I'm getting at. This tutorial will show you how to make pom poms with a proper tool, but it all seems much more difficult than it needs to be.

I'm using my pom poms as Christmas decorations for now, but I think I'll make a garland after the holidays have passed.

Email ThisBlogThis!Share to TwitterShare to FacebookShare to Pinterest
Labels: Things Worth Making 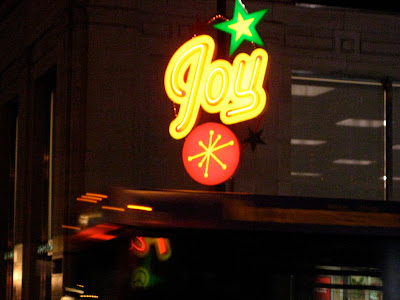 I'm digging the City of Victoria's Christmas decorations this year. I'll try to take more photos when I'm puttering around town this weekend.

I finally saw Victoria's Truck Light Parade in its entirety; it's been on my list since I moved here. 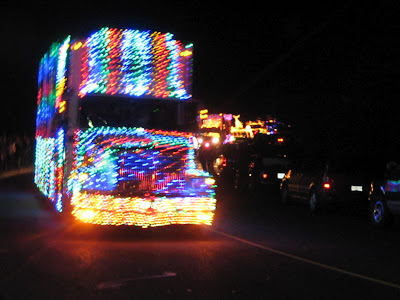 The photos are blurry, but in a good way, I think. 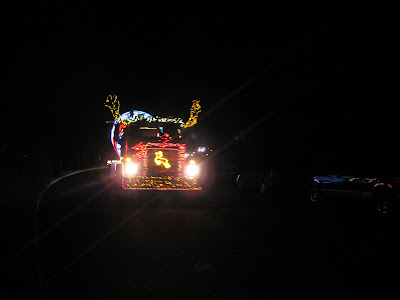 My favorite was the cement mixer. 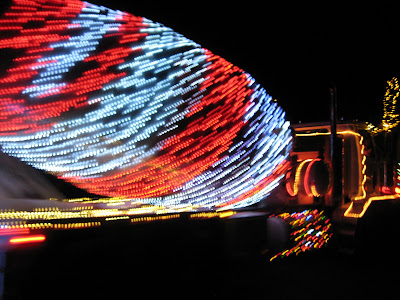 I loved standing on Dallas Road in the dark, waiting for the trucks. The parade of lights was festive as it rumbled down the road. Somehow - even with the honking and the smell of exhaust - it works.

Singing with the Hidden Cameras 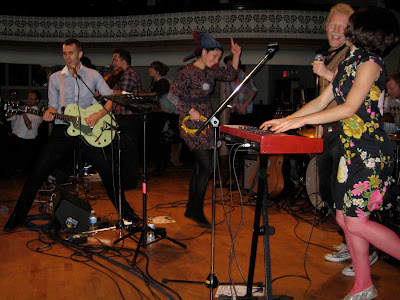 I was working at Sellution in 2003 when I first heard The Hidden Cameras. It was pretty much the perfect job because I got to rearrange furniture and listen to the CBC all day. It's rare that a band wins me over the first time I hear them, but that's what happened when Definitely not the Opera played the song Boys of Melody (you can listen to it - and others - here).

The first time I saw the Hidden Cameras perform was shortly after I heard them on the radio. I brought Ananda, and we danced around and cheered so loudly that I think we confused the band. The second time Joel Gibb, the lead singer, was in a bad mood, but it was still fun. I still regret not buying a "Music is my boyfriend" t-shirt.

The third time was a couple of weeks ago. It's notable because I watched the concert FROM THE STAGE. I was in the "choir" thanks to an invitation from my friend Galen, who knows one of the fellows touring with the band. The Hidden Cameras invite locals to take part in their shows on occasion, and Victoria was a chosen city this time around.

Meeting Joel and practicing before the show were the best parts of the experience. I could actually hear myself sing, and I think I held my own (even though I may have been the only choir member who isn't in another band).

The actual show was a bizarre experience.

Two minutes before we went on stage, we found out that we had to put on golden ghost costumes. 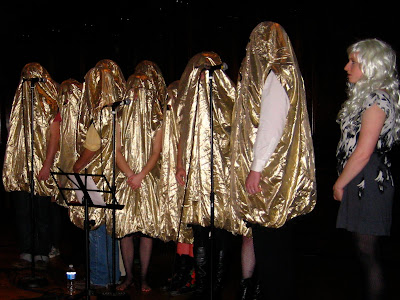 As soon as Michael saw us come on stage, he knew that I was probably freaking out. I don't like wearing masks and I don't like being around people wearing masks (one of the reasons why I'm conflicted about Halloween). I couldn't recognize any of my fellow choir members, and it was actually difficult to see where we were walking. All of us were a little confused - about when we were supposed to be on stage, about whether we could remember the 10 songs that we were supposed to sing, about where we were supposed to stand, about whether anyone could hear us since we could barely hear ourselves. It was a bit of a mess, but I relaxed after the first song and tried to get into the costume.

Since I was so focused on remembering my parts, I didn't get to enjoy the show in the usual way. There were other benefits, of course. I loved singing with Galen and Kelby - I usually watch them perform in Elephant Island, so it was a treat to join them on stage. I also loved singing with the ladies of Gentleman Reg. They opened for The Hidden Cameras, and they joined us in the choir since they're familiar with the songs. They have such beautiful voices! They were angels in blond wigs who helped us remember our parts, and I love them for it.

We took off the ghost costumes eventually (they were hot, yo), so I have proof that I was on stage. In a v-neck sweater. Hey, I went to the show from work, so that's what you get. 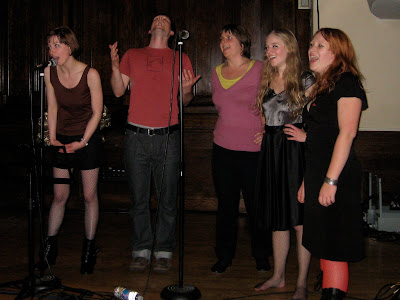 Thanks for the invite Galen. I love this photo of you.