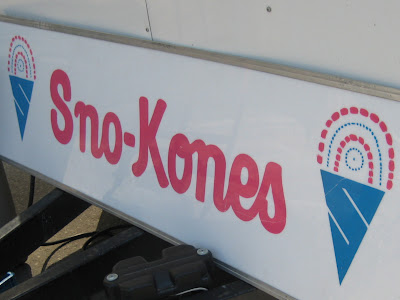 I fell in love with summer this year, friends. I fell hard. I'm so in love that I'm sad that it's almost over, even though fall is usually my favorite season.

I fufilled many tentative plans these past few months, and I'm sure that has something to do with my new found passion. I'll tell you about those activities soon, but you can look at some photographic documentation over here until then.

Maybe once I write down some new tentative plans I'll remember my real true love. Who doesn't look forward to a cup of tea and a puzzle on a crisp fall evening? 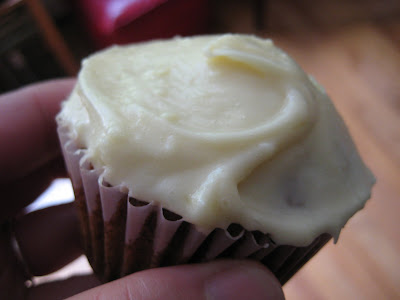 Robyn celebrated her birthday while she was in town, so we made cupcakes, naturally. This is the recipe we used: Carrot Cake with Maple Cream Cheese Frosting.

They were good, but I'm not sure I'd make them again. Instead, I'm more interested in making these babies: Peach Cupcakes with Brown Sugar Frosting. Yes, please.

I especially like that Smitten Kitchen says this recipe can be adapted for a breakfast muffin. If that doesn't inspire me to fulfill my tentative plans to find a quick breakfast alternative, I don't know what will. I'm almost finished the quilt I started for my Mom and her husband that I first told you about almost a year ago. (!!!) I am currently doing the victory lap, or handstitching the binding. I have to say, this is an apt expression, so congratulations to whomever (?) coined it. There is nothing like binding a quilt. It has a two pronged attack: the first prong it that all of a sudden your layers of business become a quilt, and the second is that you are FINISHING THIS QUILT! Hallelujah!

I have taken a break from working on my crafting projects generally this summer. I think it was just too hot. Since it's cooled off a bit, I have rediscovered the soothing ecstasy that is quilting for me. I love it, you guys. It pretty much has it all.

I hand-quilted this one, and all of those hours were so worth it. It's hard to do it justice in photos, but hand-quilting really communicates, you know? In all examples of it that I've seen, there's some extra mojo* in there. I don't think I've ever been more excited about something that I've made. And it's for my mom, which makes it even better. Yay!

* Read: abiding love, for a more gooshy/accurate version of how I feel about this whole business! 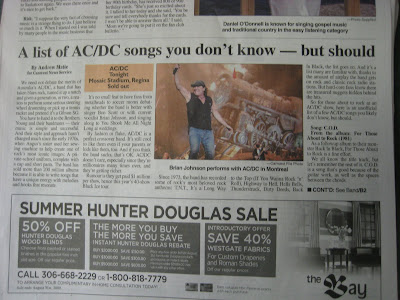 Email ThisBlogThis!Share to TwitterShare to FacebookShare to Pinterest
Labels: Saskatchewan

"You're dumber than you think I think you are."
Jack Nicholson as J.J. Gittes in Chinatown (1974)

"In America, where anger is the most validated emotion, even the feeling that things are actually pretty good in one's life is considered best expressed as fury that they might not continue to be that way."
- Tabatha Southey in her recent Globe and Mail column: In the U.S., rage against the heart machine

"Somehow everything will be."
- My baba on my sister-in-law handling identical twin girls, due in November (she said it in Ukrainian the first time around)

Posted by Erin Riley at 6:10 pm No comments:

Email ThisBlogThis!Share to TwitterShare to FacebookShare to Pinterest
Labels: Quotes 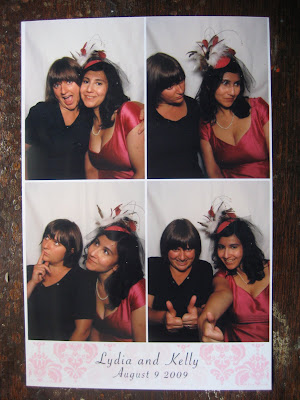 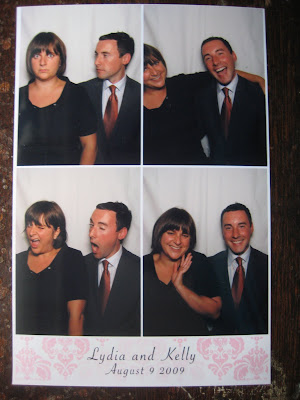 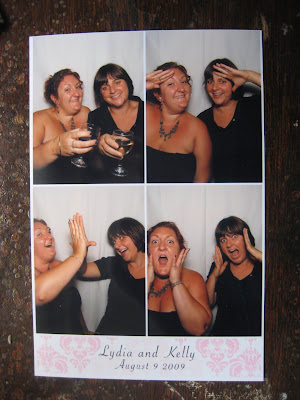 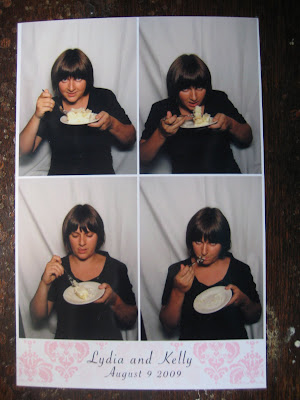 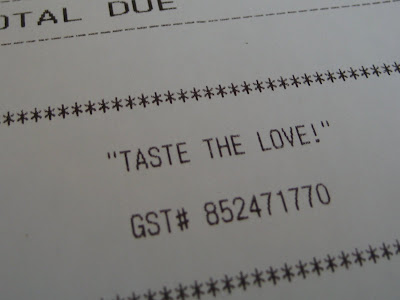 We've been eating well this summer. I've just enjoyed my first fig of the season, so I'm primed to tell you about some other recent treats. 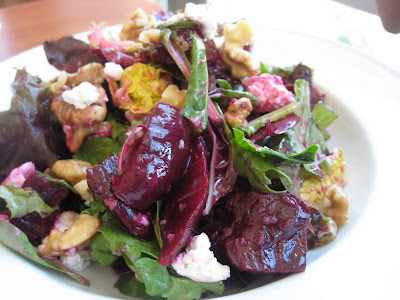 We ate at SOBO twice while we were in Tofino. Between the five of us, I think we sampled a good portion of the menu. I'm posting a photo of Ananda's beet salad because I didn't get a good shot of my favorites: the fish taco and the tofu pocket. This is one of my favourite restaurants of all time. I finally got to eat at Pig's second location in Colwood, and I can't stop talking about it. The fried chicken was unbelievable. What is that sauce? Buttermilk? There was some citrus involved. There was also watermelon and homemade iced tea. And corn bread and coleslaw. Except for the fact that it was in Colwood (i.e. not walking distance from my house), it was perfect. I hear a new location is opening on Yates Street, and I really hope they serve the Colwood menu. On the way to Tofino we stopped in Ladysmith for an amazing cinnamon bun. Michael and I shared an orange poppyseed version this time around, but we're also fans of the peanut butter bun. 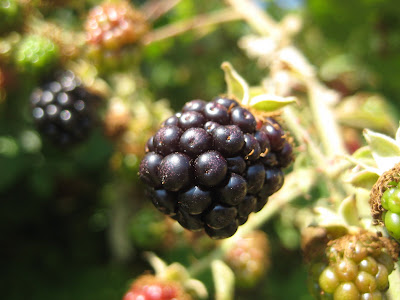 We stopped to pick blackberries alongside the Galloping Goose Trail on the way to Thetis Lake last weekend. They were just ripe, so some were a bit sour, but the good ones were very good. I still have some scratches on my arms from reaching for the perfect berries. 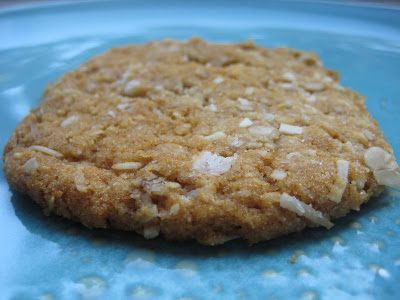 Because I have a new blog crush on Lottie + Doof, I made these ANZAC biscuits to prove my devotion. Just kidding. They looked easy to make, is all. And they were!

I've never been a fan of dried coconut, but it made sense in this recipe. My only complaint is that the cookies are a little too sweet, so I might fiddle with the sugars next time around.

I really want to make this caramel cake next, but I have plans to make some healthy muffins first. Bah.

I've been wanting to tell you how much I love HBO's True Blood for a while now. In fact, I tried to find some images to accompany such a post a few weeks ago, but a Google image search left me uninspired; the promotional photos for the show are reminiscent of Harlequin romances.

But then I found out about the advertising campaigns for the show.

These were from the first season: 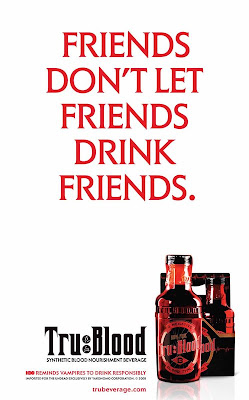 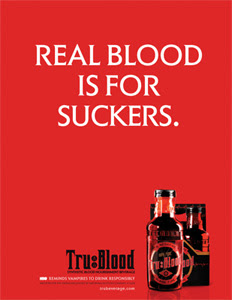 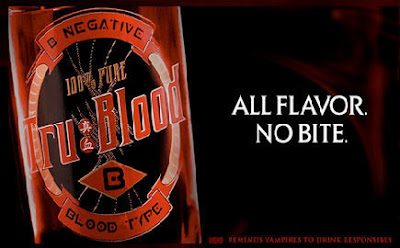 If you didn't guess it already, the show is about vampires:

Thanks to a Japanese scientist's invention of synthetic blood, vampires have progressed from legendary monsters to fellow citizens overnight. And while humans have been safely removed from the menu, many remain apprehensive about these creatures "coming out of the coffin." Religious leaders and government officials around the world have chosen their sides, but in the small Louisiana town of Bon Temps, the jury is still out.

These billboards are part of a campaign that promoted the second season:

The second season is still in progress, and it's even better than the first. Every time Michael and I watch it, I declare my love for almost every character on the show. Eric. Lafayette. Sookie. Terry. Bill. Sam. Jessica. Tara. Hoyt. Even Jason.

Love fest aside, the show is plain entertaining. It's like a fantasy novel: engaging but not consuming (you know, because vampires don't exist. Right?). Also, it's sexy (though you'll have to watch a few episodes to see what I mean, exactly).

I'm not sure if you'll like it too, but now you know how I feel.

Email ThisBlogThis!Share to TwitterShare to FacebookShare to Pinterest
Labels: TV

How to have a great summer

First, try working only four days a week. Then, plan a camping trip to Tofino with some friends (try to make sure that one of the friends doesn't get waylaid in Egypt though). 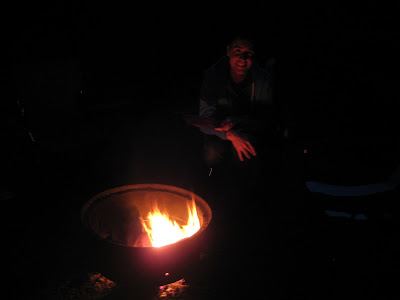 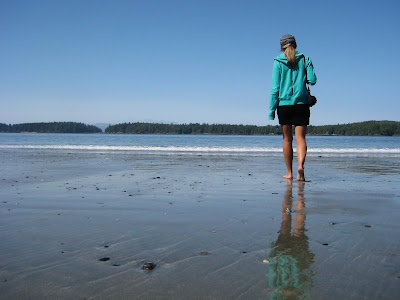 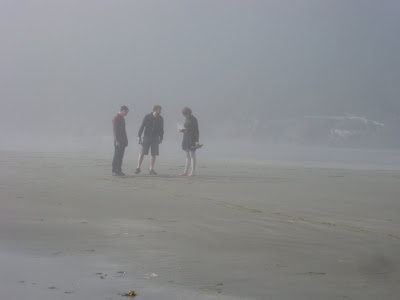 Finally, enjoy the heat (or fog, if you're in Tofino or hiking the Chilkoot Trail) while it lasts.

Posted by Erin Riley at 5:58 pm No comments:

Last month, Shannon and Chris hiked the Chilkoot Trail with friends from Whitehorse. I think they're the coolest. 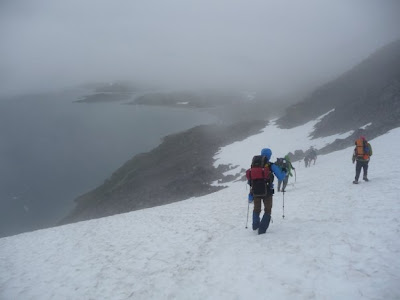 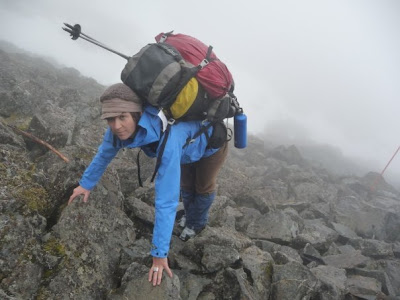 There's something about the Klondike gold rush that moves me, but then again, it's hard not to be moved by these photos of the Chilkoot Pass: 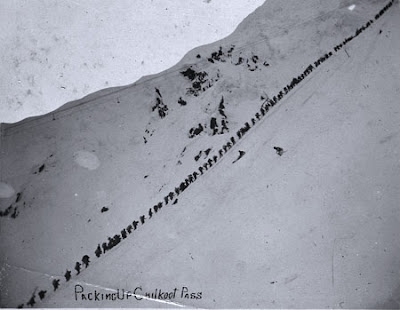 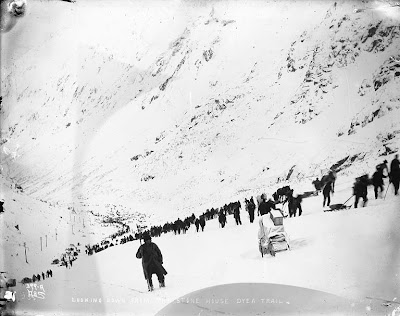 When I was in Dawson City in 2001, I saw the film City of Gold (1957); I've embedded it here, thanks to the progressive National Film Board of Canada (its mission is the make NFB films available to all Canadians, yo). I think you should watch it. Pierre Berton narrates the story of the Klondike gold rush at its peak, when would-be prospectors struggled through harsh conditions to reach the fabled gold fields over 3000 kilometres north of civilization. Whew.

On a slightly related note, I haven't read anything by Pierre Berton, but I do have tentative plans.

Posted by Erin Riley at 3:26 pm No comments: