I just wrote an op-ed for my Writing Popular Science class, and I want to know what you think. We have to submit it somewhere, so I was thinking of emailing it to The Tyee (see link on the right).

Bonding with nature through documentary television 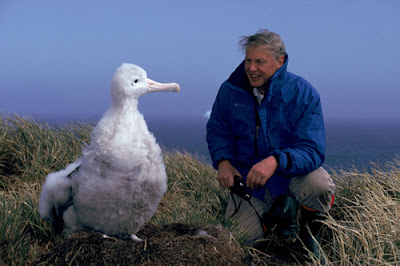 The melodic voice of Sir David Attenborough, the knight of nature documentary narration, beckons from the TV:

“A hundred years ago there were one and half billion people on earth. Now over six billion crowd our fragile planet. But even so, there are still places barely touched by humanity. This series will take you to the last wildernesses and show you the planet and its wildlife as you have never seen it before.”

I was going to go for a walk, but Attenborough has convinced me that if I want to bond with nature, I had better have a seat on my couch.

Attenborough is introducing the series Planet Earth, the 11-part BBC nature documentary that has been running on CBC since 2006.

I’m not the only one who has been transfixed by the series, and it’s no wonder. The documentary, which, as its name suggests, captures the entire planet instead of focusing on one species or region, has been aired during the height of global warming anxiety. It is also the first of its kind to appear in high definition format; nature has never looked more natural.

An American Discovery Channel release of the documentary tried to reach beyond the BBC crowd by replacing Attenborough’s narration with the voice of actress Sigourney Weaver. It worked. Talk show hosts Ellen and Oprah both featured the documentary on their respective TV shows, urging their viewers to educate themselves about the state of the planet.

But is TV the best tool we have to learn about our natural surroundings?

f you live in a city where the only green space you see on a regular basis is a manicured municipal park or the blocks of grass that your neighbours may or may not maintain, the answer is yes.

Nature documentaries like Planet Earth are beneficial because they arouse biophilia, the human propensity to affiliate with other life forms. Biologist Edward O. Wilson uses the term to describe the connections that human beings subconsciously seek with the rest of life. In our increasingly urban landscape, we have to find the connections where we can, and in our media saturated culture, TV is an accessible option.

Besides, while I might see a seal or a pod of orcas from the beaches at Beacon Hill Park if I’m lucky, I’m certain I will never be in a position to witness snow leopards pursuing markhor goats in the Himalayas, let alone be able to watch crab-eating monkeys swimming from an underwater vantage point.

While the series may arouse biophilia, it doesn’t make explicit reference to the world’s environmental problems until the last episode. In the DVD cover notes, Attenborough says this was intentional.

“This new series is more a celebration of our planet, not a lament about the state of it,” he explains. “It shows what is still there. In some areas there is no doubt that we are doing damage to our world but, at the same time, there is a vast amount of uncharted and untouched wilderness.”

Attenborough’s sentiment explains why this nature documentary has been particularly effective. It doesn’t take the doomsday approach found in other global warming documentaries, such as Al Gore’s An Inconvenient Truth.

However, it’s hard not to feel the impact of global warming as you watch the Ice Worlds episode. In it, a male polar bear is unable to find footing on melting ice; he resorts to swimming, which he cannot do indefinitely. His desperate need to eat brings him to a colony of walrus, but he is already too tired to succeed in his attack. Wounded and unable to feed, Attenborough tells us the bear will not survive.

If you’ve had your fill of complacent biophilia after watching Planet Earth, but walking outdoors isn’t for you, watch the companion series Saving Planet Earth. It explores the work of global conservation charities. BBC launched the series in June 2007 with an episode presented by Attenborough. This time he examines the impact of humans on the planet, and once again his voice and his medium make the reality of global warming go down a little smoother.

Look what I started

A tea towel by Erin Coulter:

Email ThisBlogThis!Share to TwitterShare to FacebookShare to Pinterest
Labels: DIY, Friends and family

I'm from Saskatchewan, but you'd never know it; I grew up in a farming community, but I don't know a thing about farming. I was a town kid, see. And while I spent many a day running around my buddies' farms, I never absorbed the smallest detail of farming life. My dad knows a bit more than me, and he's had the opportunity to see what harvest time is really like during the last couple of weeks. It's September and he's not in the classroom for the first time in a billion years. Instead of twiddling his thumbs at home, he's been helping the Sanderson family with this year's harvest. I'm sure the forced meditation that occurs during long days on the combine is serving him well. 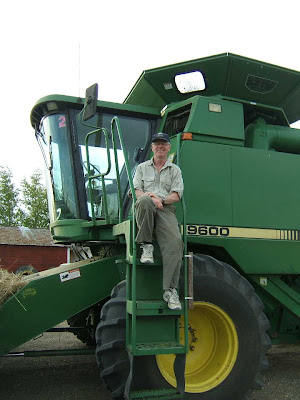 My mom has been tied to the city because she has a job, unlike some people, but she's been able to spend a night or two at the farm too; I think she looks right at home. 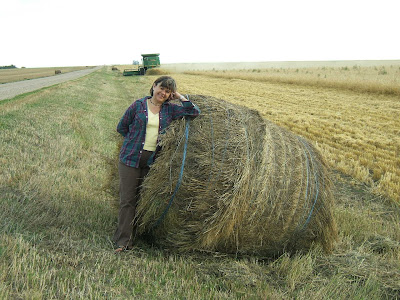 I wish I had taken an active interest in agriculture when I was growing up in Rosetown. I guess this desire is connected to the recent focus on trends like the 100 Mile Diet and the importance of knowing where your food comes from. I attended the Saanich Fair with Zoe and Dan a couple of weeks ago, and I was happy to see Vancouver Island kids engaging agriculture through 4-H. When I have children, I will definitely encourage them to take part in this type of club. They will learn about food supply, and I'll be able to cuddle their pet sheep. 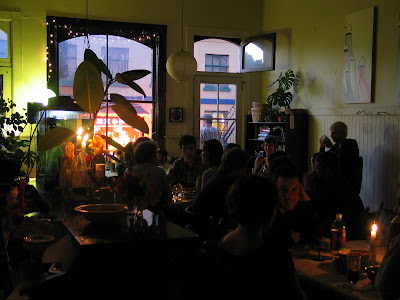 Michael and I recently attended Cultivate, a dinner party tradition established by Hona Watanabe. We know Hona through Sarah Hunt, who told us about the dinner last year, and we've been scheming about how to get invited ever since. When I received an invitation through Facebook, I knew I'd never question its usefulness again.

Hona is passionate about bringing people together to enjoy her recipe experiments with local, seasonal ingredients. People are happy to oblige.

This is what she served:

We were impressed with the food (see above), the hosts (Hona and her helpful buddies), the company (40 guests), the atmosphere (a beautiful Chinatown loft), the vision (100 mile diet, anyone?), the price ($5 plus tip), everything! I hope that Hona has the stamina to keep it up; I don't know many people who could pull off a dinner party for 40 people with such grace.