Making an effort to hang them right the first time 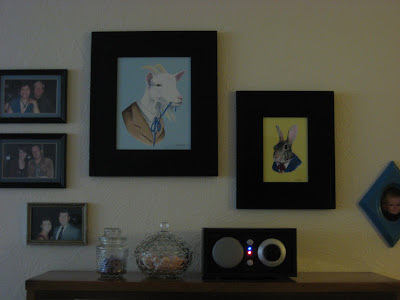 I've had tentative plans to upgrade the items on my walls for a long time (see here and here). Thank goodness Michael spurred me into action by buying me a couple of Christmas presents from Berkley Illustration. In order to give the Bunny print and the Billy Goat print their due, we moved our famous bulletin board collage to the office (I'll post a photo soon) and took down our dusty origami mobiles. By adding photos of the family, which need filling out, the candy dishes and my beautiful new radio, we've created a lovely tableau. Don't you agree?

Email ThisBlogThis!Share to TwitterShare to FacebookShare to Pinterest
Labels: Decor, Things Worth Making 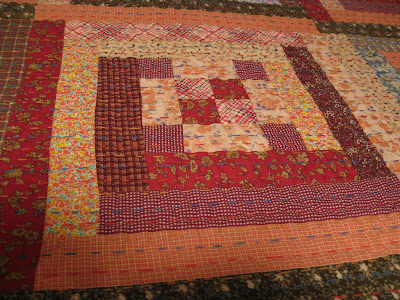 The above quilt was my favourite part of driving to Calgary and back this Christmas. More on that later.

Hi! This Christmas I found myself making major plans, major promises in crafty output, wrapping half-finished things as teasers...phew! That led to a lot of stress, let me tell you. Lessons to be learned there. Don't set yourself up to play catch up for the month(s) following Christmas! It sort of compromises the momentum of that New Year new project mindset.

I have been busy making things, but none of them feel fresh and new! Remember that sweater I started? I'm on the second sleeve! Remember the quilt? I'm making great progress on that too! I even got my first quilting injury this weekend...some type of skin friction thing...I don't have tough thumb skin yet! It would seem I'm on the road though!

As for that quilt. It is actually one of two, and they belong to my aunt-in-law(?). When we got to their house where we stayed overnight en route to Calgary, I saw a set of bunkbeds with these amazing identical (essentially) quilts on each bunk. I love them. The fabrics are individually kind of strange/loud/unlikely, but together they create one of the home-iest quilts I've seen up close. What struck me most is how the quilts are quilted. It looked like cotton perle, in three colours, big stitches, all the way along the length of each quilt. Really something else!

When we stopped at their house on the drive home, I ran downstairs to check in on the quilts again. We had a little love affair in that basement!

PS: Check this out. HOT STUFF!

I'm in a Bollywood dance class, friends. I've been planning to take a dance class (of any genre) for ages, and I finally made it happen, even though I couldn't convince any of my buddies to join me this time around.

My first class was last Monday, and I almost bailed at the last minute. I got some news at the end of the work day that suggested the stability of my job was in question (it looks OK for the time being, so no need to worry), and I didn't really feel like dancing; however, my sister convinced me that the class was just what I needed. She did this by bribing me (I'm still waiting for the treat to arrive in my mail box, so I can't tell you what it is just yet).

Of course she was right. First of all, Bollywood music can't help but make a person feel good. Second, the teacher provided bangles, ankle bells and scarves to help us get in the mood. Third, I like dancing! I took dance classes for six years as a child, and it felt good to do it again. Thanks for encouraging me, Shannon.

So, I'm off to class tonight, and I'm actually looking forward to it this time. I think I should to do some Bollywood research before my next class, so if you have any favorite Bollywood movies (or musicians) to suggest, please do. And feel free to join me for the next round of classes in March. Boys included! 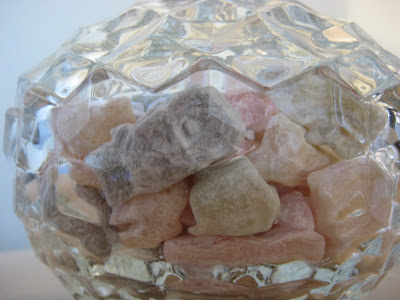 I've been taking on simple projects so far this year. This one is hardly a craft, but it makes my house a little cuter, so it totally belongs on this blog.

I bought this latest dish at a church yard sale for 3 dollars (a little steep, in my opinion), and I like it because of the lid. The candies are jelly babies, but I don't recommend buying this candy for your dish; it's better to buy a hard candy that you aren't likely to eat in one sitting, and better yet if it's colourful.

I'll show you where I placed my dish in a few days (seriously, I'm back in the blogging game); it was part of a larger project that involved introducing some new decor to our home. 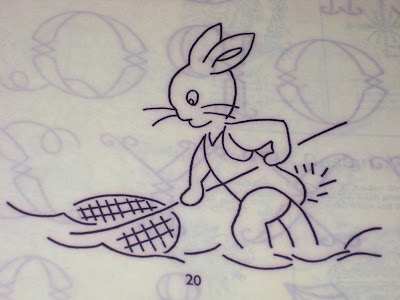 I'm pretty sure I need to start a new embroidery project. My uncle, who does most of my thrift store shopping for me, passed on a great book of multi-impression transfers, including this little bun. He's fishing! I think.

Posted by Erin Riley at 1:29 pm No comments:

Email ThisBlogThis!Share to TwitterShare to FacebookShare to Pinterest
Labels: Things Worth Making

Friends, I love awards shows. I can't explain why, I just do. Maybe I like watching people get nervous and make speeches. Whatever the case, yesterday's Golden Globes were particularly good because there are a lot of quality shows out there right now. I was particularly happy that Slumdog Millionaire and 30 Rock did so well; the only disappointing bit was that Milk wasn't nominated for more awards.

Here is a favorite moment featuring Ricky Gervais. Might I add that the movie that he refers to, Ghost Town, is totally worth watching. It won't blow your mind or anything, but it is a perfect little story that will entertain you the way a movie should.

Email ThisBlogThis!Share to TwitterShare to FacebookShare to Pinterest
Labels: Procrastinating on the Internet

I've learned two important things since our television broke on New Years Eve. First, I've been watching too much TV. Second, you can watch TV on the Internet!

While I didn't break the TV myself, I did set off the chain of events that led to it breaking.

It all started when I was fiddling with some of the TV cords, hoping they would help me connect my iPod and my new Tivoli radio (they didn't). When Michael attempted to reconnect the TV cords later that night (after he bought me the right cord), he made the mistake of tipping the old beast forward to access the back. The TV didn't like that at all. The screen turned blue, and then it went black.

We are planning to buy a fancy new TV, but we're waiting to see if prices come down before the end of the month. When we made that decision, we imagined that a month without a TV would be good for us.

It's been hard, friends.

I'm making it sound like we watch more TV than we do. The fact is, we haven't had cable for a few months now, and we only follow a few shows. Still, since the TV has been gone, we've realized that it must have been on more than we realized. I almost feel lonely without it.

We're adjusting though. The radio is getting a lot of air time (a well-timed purchase, if I do say so myself), we're listening to new music (hello, Eux Autres and The Good, the Bad and the Queen), we ate at the kitchen table for the first time in months, and - maybe most importantly - we've been exposed to fewer commercials.

Thing is, we can still watch TV shows and movies that we download on our laptop, and I just discovered that one can watch practically any show on network websites. I can watch The Office on Global, Corner Gas on CTV and The Rick Mercer Report on CBC (I wasn't even watching those last two before the TV broke, but hey). I even gave Mad Men a try last night. I didn't want to like it, but I'm intrigued.

So, in addition to those first two lessons, I guess I've also learned that breaking your TV is a great way to start off the new year.