I heart camping, but why?

Michael and I went camping at Lake Cowichan last weekend. It was a short trip, but it was our most successful yet. Read: we didn't freeze during the night and we actually slept in. While we were smoking up our clothes by the fire, we mused about why people like camping at all. I guess it comes down to appreciating nature, fending for oneself and getting away from the hustle and bustle of everyday life, but you have to admit that it's sort of strange to put so much effort into a certain amount of discomfort. Am I right?

Fending for oneself (by sharpening a roasting stick): 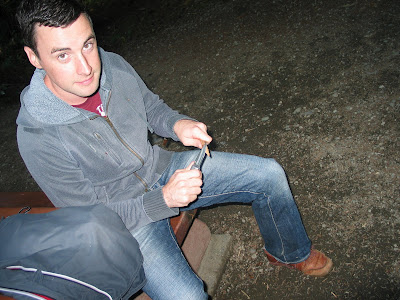 Getting away from the hustle and bustle (with a fancy rental car): 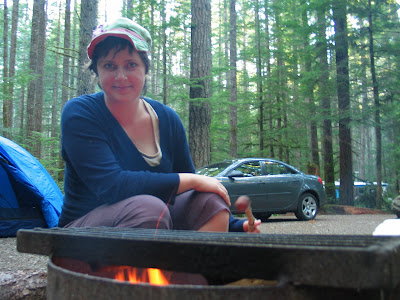 Appreciating nature (with a worn but irresistable vantage point): 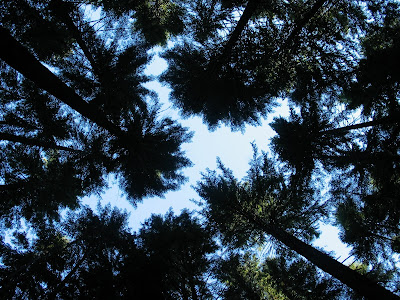 Thank you for knocking me outta my head

There are too many things to write about San Francisco because that's how the city rolls. When I got home I told Facebook that I just got home from the moon, and I meant it. If you want to go on a holiday in North America but you don't want to feel like you're in North America, or anywhere else for that matter, go to San Francisco. Oh yeah. And go see my sister.

Because it's so overwhelming, I was happy to leave the city for a day for a bit of respite. Shannon and Chris have turned their second washroom into a veggie oil processing plant, so we drove to Santa Cruz fueled by veggie oil. Hooray for all of the good things that means! During the ride we listened to the soundtrack for the Lost Boys: a 1987 American horror film about young Californians who must fight a gang of teenage vampires. It was filmed in Santa Cruz, which was one of the city's attractions for me. The other attraction was this: 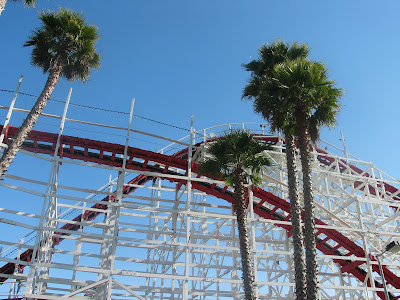 I've never been a big fan of amusement park rides, especially ones that spin, but I have taken a shine to wooden roller coasters. I like the one at the PNE in Vancouver and I like the Santa Cruz coaster, the Giant Dipper, even more. I think I was laughing the entire ride. Shannon was screaming. The coaster had extra significance because of the song Roller Coaster by the Sea by Jonathan Richman. I've posted the lyrics below, but because I know they won't have the desired effect on their own, I think you should try to listen to the actual song. It became the theme song for the weekend to Chris' dismay; Shannon and I listened to it one thousand times. It's how we roll.

Roller Coaster by the Sea

You see I went on the roller coaster last night when I was feeling bad
Down by the sea in Santa Cruz, and I was feeling sad
But we went down, and around, and it knocked me out of my head.

See, I went on a roller coaster last night when I was feelin' bad
We were down by the sea in Santa Cruz, and I was sadder than sad
But we went down, and around, and it knocked me out of my head

The Santa Cruz trip took place on Friday. Saturday night was reserved for the Giraffes: 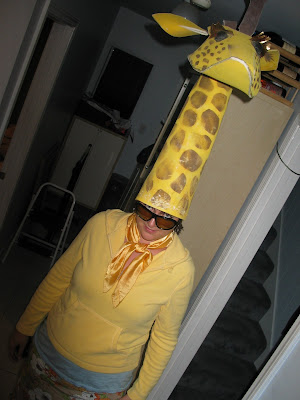 I was a bit nervous about the Giraffes when this picture was taken, but I warmed up to my costume as the evening wore on. Five of us dressed up as Giraffes in order to attend the animal masquerade at The Great American Music Hall. The costumes were part of a Burning Man theme camp last year, but they have taken on a life of their own. I found out why: being one of herd of Giraffes makes you famous. People want to talk to you, touch you, take your picture, invite you into their home for intimate moments (I was propositioned by a random woman on the street), welcome you to their wedding receptions, anything! All this from a Giraffe head made of foam and some yellow accessories.

The day after the Giraffes required some healing time. That's why Shannon and I went to the Kabuki Japanese communal baths on Sunday. I wish every person I know could go to these baths every week. The baths are for women three days of the week, men three and couples one (on the couples day you have to wear bathing suits). I love the ritual of moving from the showers to the steam room to the sauna to the cold pool to the hot pool. It's beautiful! The spa also provides lemon and cucumber water, tea, ice cold wash cloths, fancy soaps, salt for exfoliating and cucumber slices for your eyes. Seriously. It was a dream. Shannon said I should make tentative plans to open one in Victoria. 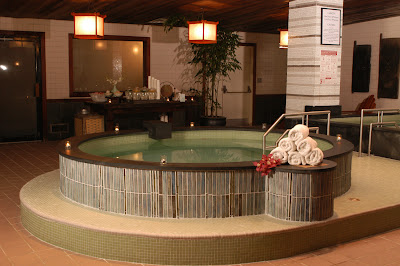 I could keep writing about San Francisco forever, like I said, but those were the main attractions. Also, I'm tired.

I'm finding it really hard to get back into the swing of things this week. I arrived home from San Francisco on Monday and I just had time to do laundry tonight. However, I did have time to post my pictures, so check them out. In the next few days I will write about these highlights: the roller coaster by the sea; the Giraffes; and the Japanese communal baths. Intrigue!

Because I'm too tired to write this minute, I'll leave you with a new tentative plan: learn the following routine from an episode of this year's So you think you can dance (the only show I'll watch in the summer). It's beyond anything.

I've told a few people that I'm planning to do this dance at my wedding, but that was rash; I'll be happy if I do some of these moves in the privacy of my own home. Maybe I already have. 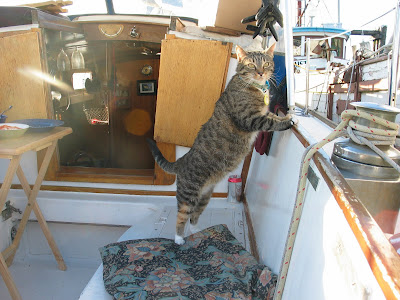 My friend Emily lives on a boat! With her boyfriend and her cat! Last week, Dana and I visited the famous boat and its occupants because they're moving into town in the fall. Dana is from Alberta and I'm from Saskatchewan. We get excited about boats! I'm happy that Emily will live so close to me, but I also want to visit the boat again. Maybe in August. Emily?