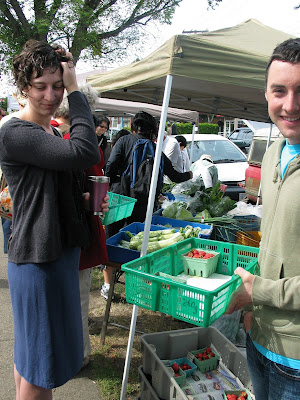 On Saturday morning, Sarah, Michael and I tried to make it to the Moss Street Market in time to hear the start-up bell. We didn't make it (because of a coffee detour), but when we arrived shortly after 10, we joined the first line up we saw. Why? Local strawberries! It turns out that other vendors were selling strawberries too, but we're sheep. We saw a line-up and we stood in it. And the strawberries were worth the wait (even though this vendor would only sell one basket per customer).

Friends, I'm just going to go ahead and say it: I don't think there is anything better than local strawberries (this includes those picked from your own garden, obviously). Lydia, I know you're with me on this. Sometimes I think I'm exaggerating their goodness, but when I have my first local strawberry of the year (those underripe ones from 2 weeks ago don't count), all doubts disappear. They are so good that I was actually sad while I was eating them: the seaon is too short! How much longer do I have? Should I eat a basket a day? Can a person eat too many strawberries? Will I ever be satisfied? I feel a little short of breath thinking about it.

I'm going to Saskatoon on Friday, and my dad has promised me strawberries from the garden. Combined with the fact that Michael and I are going home to meet our new baby nephew (Jen and Tim's son Kaden), this vacation is going to be hard to top.

My blog is one year old today! In my first post, I didn't think I would be able to make it happen: I make many tentative plans that never come to pass. But I persevered! Also, I succeeded in completing several of my original tentative plans: notably, making perogies and using my camera more. I still only use my sewing machine to hem pants though. Coming soon: curtains!

I want to take this opportunity to thank all of the folks who comment on the posts and those who appreciate my musings anonymously, but mostly the ones who comment. I love the comments more than you can ever imagine. On that note, the response to last week's post made me so happy; there is so much knowledge to share, and I love that people wrote long, thoughtful responses. Do that again. I have tentative plans to prepare a follow-up to that post in the near future.

BABY! GET IN MY BELLY!

I was just at a press conference where this guy says to the TV cameras: I've been thinking about grandchildren more and more lately. I hope my daughter-in-law is listening to this.

A week earlier, I did a double-take when I saw the cover of Maclean's. It read: Hey Lady! What will it take to make you breed? Your government needs to know. You can read the main article here. It brought up some interesting points, although I found the title crass. I especially liked the bit about France. That country has some great incentives for parenting, which don't try to get women to stay home; in fact, almost 80 per cent of French women work. This is why:

There is a calibrated income-tax rate for families whereby the more children a couple has, the more money they keep in their pockets. The state offers a monthly allowance of roughly $400, which is bumped up when the child reaches the age of 11. Parents are entitled to a tax deduction for in-home child care help (which Prime Minister Dominique de Villepin, who stepped down this week, recently announced will be doubled). There is an extensive state-run crèche system, where parents can leave their toddlers at a moment's notice, for free. Families with three or more kids are deemed "famille nombreuses" and are eligible for zero income tax, heavily subsidized rent and transportation, and state-funded parental leaves that can extend for years. They also get free access to many public amenities, and about $325 per year toward extracurricular arts and athletics programs for the kids.

The response by the Tyee is also worth a read: So you want me to breed?

I want to know what my lady friends think about the pressure to bear children! Also: let's move to France!