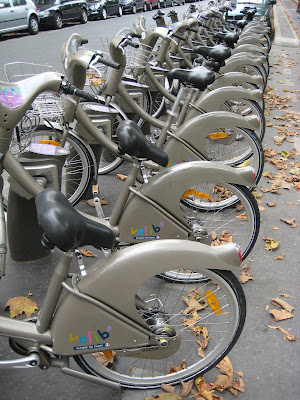 Michael and I are fans of the mayor of Paris, Bertrand Delanoë, because the Vélib bike program was his brainchild. We didn't try it while we were there, because, you know, we didn't really want to ride around an unfamiliar city without bike helmets on, but we were impressed by it all the same. It's a good idea, and people actually use the bikes.

We didn't think that a similar program would work in a Canadian city (especially because of the bike helmet issue), but then I saw this Vancouver Sun article. The wheels are turning in Vancouver, and I thought you might like to know.

Side note: I have tentative plans to put photos on Flickr and other plans to stop writing about Europe. I'm going to try to get there by the end of the week.

Email ThisBlogThis!Share to TwitterShare to FacebookShare to Pinterest
Labels: Travel

Cool! Barcelona has a similar program and I saw tonnes of Spainards zipping around on their red bikes when I was there in May. It's time limited: you only have the bike for something like two hours. I don't think it would fly in Toronto either. Canadians don't seem very into "sharing"; car co-ops are here but not in a huge way. And lots of areas in Barcelona are car-free so naturally better suited to zipping around on a bike.

We really need better bike infrastructure here - bike lanes, bike lane traffic lights, etc. It's pretty ridiculous how little progress the City has made with that. Montreal has it better.

After seeing an elderly woman get hit (and hurt) by a woman riding a bike at top speed ON THE SIDEWALK two weeks ago, I've been noticing how unlawful so many cyclists in Toronto are. I see a higher percentage of cyclists doing illegal and dangerous things (biking on sidewalks, biking the wrong way on one-way streets, running reds and stoplights, turning without signalling) than motorists. It makes me MENTAL! I feel no sympathy for those cyclists.

Sorry, this has turned into a bit of a rant! Safe and happy biking everyone!
Erin C.

copenhagen has the bycyklen program, and i rode one of the bycykles while i was there. it's a compact city, and the huge bycykle lanes definitely make it the best way to see the town. wish they had the same thing here, because i've had 4 flats in the past month and am on the verge of swearing off bycykles for good. or maybe it's time to buy a shiny new one.

Yeah. I think we need better bike infrastructure before we could make a program like this successful in any Canadian city.

Hey! You should link people to Courier articles about such things.
-Cheryl

Give us the link Cheryl! That's your job! (I referenced the Vancouver Sun because that's what I saw on my lunchroom table as I heated up my lunch in the microwave. So much for my plans to use the microwaves less.)

I think my sister helped start a bike-loan coop in Calgary, the city that might as well have been planned by the pickup truck industry. I'm not sure how that is going, but if Calgary could support a bike coop I think there is hope for EVERYONE.

I look forward to not having to own anything except my own toothbrush. My house will be so clutterless in our communist future!