Rabbits disapprove of everything 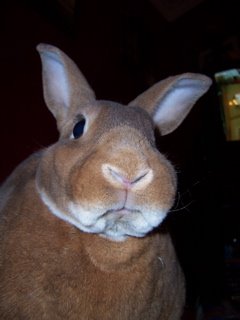 I'm wrapping up my position at the Investment Agriculture Foundation of BC with only four more days to go. The job has served me well in terms of pay, resumé value and closeness to home (here's to being a part of the six percent of Canadians who walk to work!), but it's been a little boring at the same time. I was too qualified for this job - a fact my boss and I both acknowledged from the get-go - so I ended up with a lot of spare time on my hands. I spent many hours browsing the Internet, and I have found many mindless forms of entertainment as a result. And when I say mindless, I mean it. The above picture is from one of my latest finds: the famous disapproving rabbits. The rabbits have brought me a lot of joy, even though they look unnaturally large and I'm pretty sure they've all had heart attacks since their pictures were posted. I discovered them on the website where I receive daily cute therapy: Cute Overload. I'm especially fond of the site's Rules of Cuteness, such as rule 7: A thing, accompanied by a smaller version of that thing, is always cute. Then there's rule 24: Have suction cups on your hands. Who can argue with these kinds of rules? I figure looking at puppies and kittens has to be good for one's mental health. Even if it doesn't have any measurable impact, it sure does make the time fly (especially because the site adds new pictures multiple times a day), and that's what I've been looking for.

Email ThisBlogThis!Share to TwitterShare to FacebookShare to Pinterest
Labels: Procrastinating on the Internet

Holy crap I love those bunnies!

I want a grumpy bunny! I can hardly stand it.

Wow. That is some hefty disapproval!

One extra: this hare disapproves of tortoises.