Free to be you and me

I don't want to be a lazy blogger. It's easy to post a link to a fabulous video (see previous entry) and not explain exactly what this song means to me and where it comes from, but that's not what this blog is about. Friends, this blog has depth. 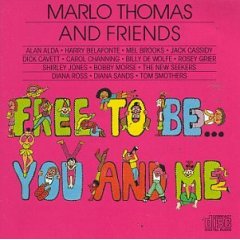 The video is from Free to be you and me - the best show you could ever show your children. Note the famous names involved in the production, above. Marlo Thomas played Rachel's mom on Friends, FYI. The show was made in 1971 and I first watched it in grade 2 (1986-87), possibly on a film projector. I struck gold when I befriended Marla Sanderson in grade 3 because, aside from being the sharpest kid in the class and a great friend to boot, her family owned the show. They had one of these machines that plays videos that were the size of record album covers. Anyone know what kind of machine was that was? No matter, we watched the puppet babies enough to memorize bits of dialogue that have never left me:

The memory of that dialogue, however faded, was too tantalizing to ignore for long. A few years back I decided to track the show down - not too hard thanks to the Internet. I ordered the dvd and prepared Michael for the wonder that is Michael Jackson as a black child. He couldn't resist the show either, but he had his own favorite song: Parents are people. It goes a little something like this:

Some daddies are writers, or grocery sellers,
Or painters or welders, or funny joke tellers,
Some daddies play cello, or sail on the sea,
Yeah, daddies can be almost anything they wanna be.

You can bet that Michael is singing the lyrics in his head as he reads them. It's a catchy song, believe me or listen to it yourself: YouTube has almost all of the show's segments available here.

I don't have the dvd anymore, which is why I'm relying on YouTube and my blog to share the good times. I gave it to Mike and Meera (in the days before we invested in a dvd burner) so they could show it to their three lovely children; I'm so glad I passed it on because now I get to imagine Manas singing and dancing to the songs, as I'm told he was wont to do.

I hope you all get a little enjoyment out of the show or the lyrics or this sentimental jibber jabber. Remember (and this one goes out to Robyn, who's about to leave her beau in London for a few months):

I really wish I had high-speed internet at home so I could watch those videos. I think we rented all those when I was a kid, because I know the tunes that go with those lyrics, and I definitely remember some sort of related book with fondness.