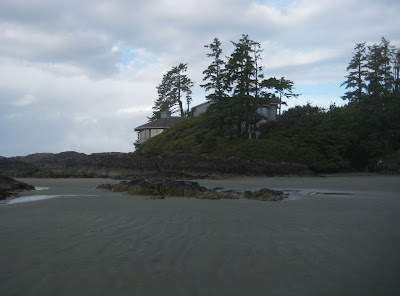 Michael and I got to fulfill a long standing tentative dream a few weeks ago. We spent a night at the Wickaninnish Inn.

I've wanted to sleep in that place since I found out it's considered one of the best hotels in North America. Who wouldn't want to experience that?

When we were living in Tofino we ate a couple of brunches in the restaurant and drank a couple of drinks in the lounge, and last February we had a steam in the spa; but while amazing, these experiences didn't satisfy my curiosity.

I schemed about celebrating my university graduation with a night at the Wick, but I just couldn't justify the price. The standard rooms are almost $500 in the summer months! We also considered spending our honeymoon there, but we decided to go to Hawaii (for some much needed Vitamin D) instead.

So, how did we find ourselves at the hotel when it has such a hefty price tag?

It happened like this. We were at a dinner party in Tofino and the owner ended up sitting beside Michael. He found out we were camping. He looked out the window and noted that it was pouring rain. He confirmed that there was room at the inn. He offered us a "camping" deal. We accepted.

Not only did he help us fulfill a tentative dream, he kept our butts dry; when we returned to our tent the following afternoon, our mattress pads were soaked through.

It was hard to return to the campsite after experiencing that double jacuzzi bathtub. And the view. The private deck, king size bed and gas fire place were pretty nice too.

We lingered in the room as long as was acceptable before checking out, and I think my curiosity has been thoroughly satisfied. That said, I wouldn't say no to another night or two down the road, just to be sure.

If you want to see some actual photos of the room (to satisfy your curiosity) and some others from our trip, check out these Flickr photos.

What a lovely story---and wonderful surprise! Definitely beats sleeping in a wet tent. The photos are great too. I want a tofu pocket!

Brie, you need to plan a trip to Tofino just to go to Sobo for a tofu pocket. You will love it!