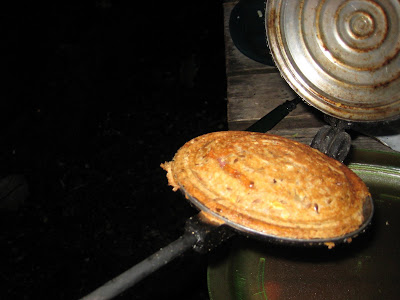 It's not too late for a bush pie, friends. Michael and I saw some folks having a barbecue in a provincial park just yesterday, so if you don't mind a cold nose with your camp fire, you should try one. Otherwise, make a tentative plan for next summer. 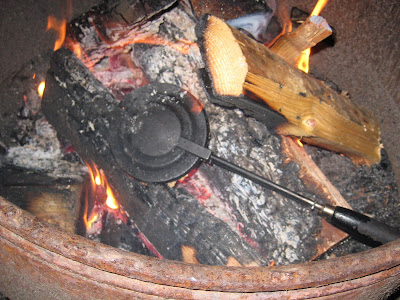 When I attempted to buy a bush pie maker before a camping trip in July, I couldn't find one that I liked. I grew up with the one pictured here, and I'm so happy my parents passed it on to me when I was visiting in August. I prefer it to others I've seen because it's round (like a pie) and because it has a latch to keep it closed while in the fire.

We made this pie when we were in Tofino last month. Since it was my first try (in many years), we kept it simple: salami, cheese and tomatoes. This savory version is basically a grilled cheese sandwich, especially since you butter the outside of the bread before placing it in the mold.

After clamping the mold together and pulling off the excess bread, your pie is ready for the fire. I think ours were in for a total of five minutes, but I opened them every minute to make sure they weren't burning, so that's just a rough estimate.

There are limitless savory fillings for these things -- when I was a kid, I preferred a Hawaiian pizza bush pie -- but there are sweet options too. I haven't explored the potential here, but I'm looking forward to trying apple pie filling and cheddar cheese.

Email ThisBlogThis!Share to TwitterShare to FacebookShare to Pinterest
Labels: Eating, Things Worth Making

I have to admit being very excited (and presumptuous!) about trying these as soon as the opportunity presents itself.

Why have I not heard of this? I love camp food and this looks fun!