Photo update, one of Michael's top 10 ideas of 2008 and a small complaint about Flickr

I've posted new pictures to Flickr. Jen, Tim and baby Kaden recently visited us for a week, and we joined them on a weekend adventure to Seattle. It was tops. There was lots of baby time, lots of walking and lots of good food.

Seattle is a hard city to navigate, even though we've been there quite a few times over the last 10 years, so Michael came up with a handy map idea to help with the driving and the walking. He took digital pictures of key Seattle neighbourhoods on Google maps, and referred to the camera when he needed a guide. He declared it one of his top 10 ideas of 2008. He loves the compact nature of the map (which you can still enlarge at will) and he feels it doesn't mark you as a tourist, like a regular map does. I'm not sure about that last point, but it was handy. He had me save one of the map photos as a commemoration of the trip and his great idea. 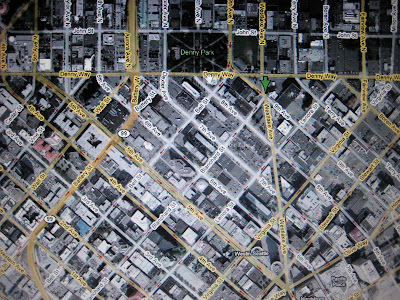 If you look at my Flickr photos, you'll see that the photo order is a little mixed up, which is my only complaint about about the program. I read about the problem here, but there doesn't seem to be an easy way to reorder the photos once uploaded. Tell me how you deal with this problem! Or are you just more laid back than me?

Email ThisBlogThis!Share to TwitterShare to FacebookShare to Pinterest
Labels: DIY, Friends and family

that camera map idea truly is great! i can't wait to use it. i'm with michael, i don't like whipping out a map so everyone knows that i'm a tourist.

as for flickr, i find choosing the pictures i want to post in reverse order helps me keep them in order on the site. it takes a mild amount of planning. i think that's what i do anyway, it's been so long since i've posted to flickr....i best get uploading.