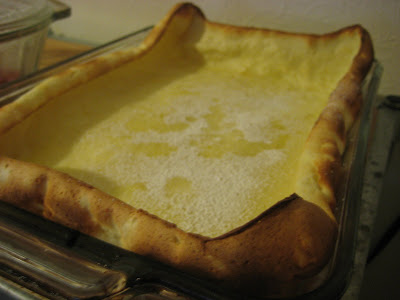 This isn't the best photo, but I hope you can see how this Dutch baby pancake is a show stopper. You should have heard the exclamations when I pulled this out of the oven for Sunday brunch. It's basically a giant yorkshire pudding! But sweeter!

I have happy memories of baked pancakes because we used to eat them on Christmas morning when my dad could still eat wheat. The main attraction (other than the name) is the efficiency of the meal. First, there are only four ingredients. Second, you don't have to hover over the stove flipping pancakes to enjoy the pancake experience. I understand that some people (e.g. Jen) enjoy flipping pancakes (she loves Smitten Kitchen's recipe for blueberry pancakes), but not me. I bake my pancakes. Save the frying pan for the bacon. (I think I might have to put those last two sentences on some T-shirts.)

I found my recipe for the dutch baby pancake in the Joy of Cooking, but I found an online version for you here. I made the double dutch version, which entails doubling the recipe and using a 9x13 baking dish intead of a cast iron frying pan. I suggest you top the pancake with icing sugar to liven it up a bit, and maybe even try adding some apples to the batter for some variety. We served the pancake with whipped cream and maple syrup, and there were no complaints.

It's really good, friends. I hope you give it a try.

P.S. This recipe resembles one that I put in the cookbook we made for Christmas, one that I have never tried but wanted to keep on my radar. I haven't made it because it requires a cast iron frying pan, which I don't own. It looks like I've got a reason to get my act in gear.

We have cast iron over here. Maybe we need a brunch date to try this out? It looks like fun.

Alright, not only have I just learned that there is such a thing as a baked pancake (genius! I hate flipping), but also that recipes are available in the Joy of Cooking AND the lovely cookbook I got for Christmas. A plan takes shape...

Sarah, I'm definitely up for a brunch date in the near future, especially if it involves a baked pancake.

Dude. You should try baking your bacon. It kicks frying's ass. Then you could do both things at once.

ALSO: I'm under the impression cast iron's cheap. Read Ruhlman for inspiration to buy one.

You should most definitely invest in a cast iron. Not pricy but so incredibly useful! We use ours almost every day, especially for steam-frying vegetables and greens.

Also, you don't happen to have a GF version of this recipe, do you? It looks so delicious, I may just have to try it just using my regular GF flour mix and see how it turns out.

Hope you guys are well!

Hey Jesse are you using almond flour yet? I don't think you can make this recipe with almond flour but you can make GREAT pancakes. Oh an coconut flour makes GREAT crepes - it is lighter so maybe a good candidate for dutch baby....