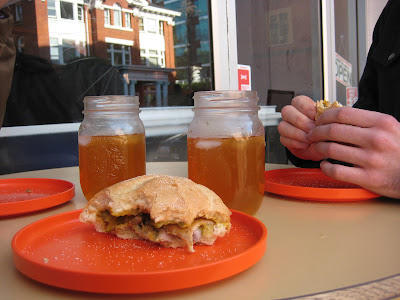 I'm sure you've noticed that I've been favouring Things Worth Making lately (I just published a post about my new scarf). What can I say? I've been productive!

But I've been up to other fun things. I had a great weekend where I finished all of my chores on Saturday morning so I could completely relax for what remained. Michael, Jen and I had a lovely afternoon shopping around town and eating at Pig. We needed the iron, yo.

We had friends (including a baby friend) over for brunch on Sunday, and I made a baked pancake that I'll be writing about (on the other blog, obviously) in the near future. It was such a great weekend that I forgot that I had to work on Monday. Monday morning was hard on me. So was this morning, come to think of it.

I'm already looking forward to next weekend because we're going to Tofino with Ananda, who planned the trip with her upcoming birthday in mind. None of us have been back much since we lived there three years ago, which is a real shame. Here's to correcting the error of our ways! Michael and Ananda are planning to surf, and while I was against the idea at first, I might be warming up to the notion of jumping around in the waves. We'll see.

WTF why haven't I eaten at Pig yet?! It's on the agenda for my next visit.

I want to go to Tofino with you guys. *puffs out cheeks* I'm jealous.

Baked pancakes?! I must know more! I'm off to your other blog.

Pig doesn't really have anywhere to sit, so we don't generally bring guests there. But next time! In April?

I think I will have to take Sean to Pig perhaps. Maybe pre-wedding! We'll be charming.