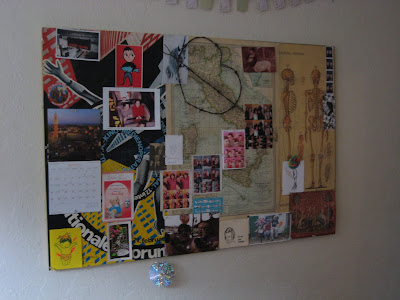 When we put up the new art earlier this month, we had to take down our trusty bulletin board. Ananda thought it was the end of an era. And while Michael is a little tired of the bulletin board and might have been happy to prove her right, I decided it would find a new home in the office.

We've used bulletin boards as a cheap way to decorate our walls since we moved into our first apartment in Vancouver. That'd be about, oh, eight years ago. Back then, we had three of these giant bulletin boards lined up in our living room, and they were full of cards, flyers, photos and posters. So much design goes into little bits of paper. It's fun to have a place to collect it all. 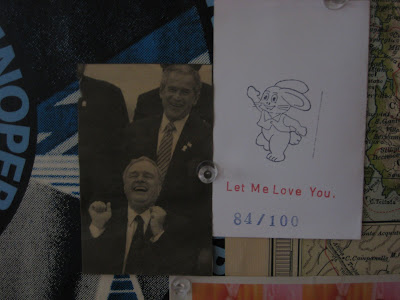 When we moved to Victoria, Michael convinced me to leave two of our boards behind. They weren't bulletin boards per se (cork board is expensive on such a grand scale). Rather, we bought these sheets of cork-like board at Home Depot from the flooring section for under 10 bucks each. They shed a little dust, but have otherwise served their purpose. 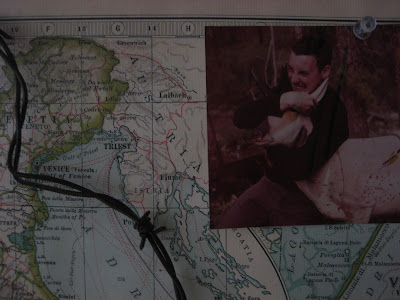 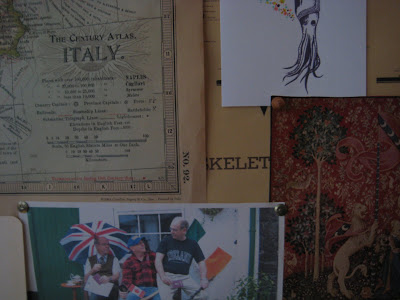 Now that I've taken these photos, I wish I had captured the original boards as they evolved. They can feature such funny moments. That photo of Michael wrestling the deer, for instance. It was taken on a shooting range when we lived in Whitehorse (the deer isn't real, friends).

I also love that picture of my Uncle Stephen(s) in the bottom photo. He used Photoshop to capture his three citizenship identities at once. I'm just plain old Canadian, but I have tentative plans to have more fun with Photoshop.

Heck, I love everything on the board (especially since I updated it during the move to the office).

So there you have it. The bulletin board collage is such an easy way to decorate, I couldn't let it go.

Bulletin boards are the best! I had them in high school and my undergrad and loved sticking up cool cards, funny photos, inspirational quotes. Maybe that's what my bedroom needs - a bulletin board. I also had a plexiglass cover on my desk and would put (what else?) clippings of horses under the cover. Hours of fun!

That was one of my favourite features of your place on Watson - that enormous bulletin board. Michael should start making collages and selling them!

Also, that photo of your Uncle Stephen is hilarious!

I'm glad you appreciated that photo of Stephen, Erin. It's getting a little faded, so I figured that I needed to capture it on this blog.