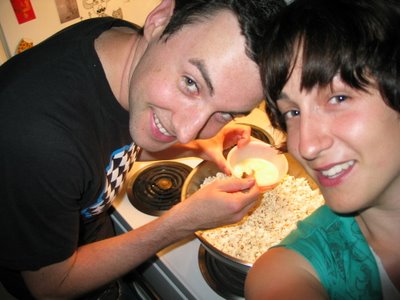 For those of you that read this blog regularly, you will have enjoyed comments from Jillian (Michael and I have bets laid on how long it will take her to get her own blog since she's proven to be such an enthusiastic commenter). She's on Vancouver Island for a holiday right now, and we've had grand times with her over the last week. Jillian was supposed to move here this September, but she landed a wicked job in Nunavut and we're not sure that we'll ever live in the same city again. Even so, we're entrenched in each other's lives – so much so that I introduced her to my parents over martinis on Monday and I learned my first Afro-Brazilian dance steps with her mom on Friday. Also, we'll always have the best guest room for her to stay in, so we'll continue annoying her other friends, who complain about the amount of time we get to spend with her, for as long as we're able. The only thing that's left now is for Michael to become buddies with Jillian's dad, because I'm out of the running on that one.

Well, I don't know you Jillian, but I do enjoy reading your comments, know that Erin LOVES you, and hope to meet you someday. It probably won't be in Nunavut, but it sounds like you return to civilization regularly enough, so until then....
keep on truckin'.

FYI... if you didn't get this from Erin's post about Jillian... Her mom is in-fact Afro-Brazillian, and moreover, her Dad could probably beat you in an endurance foot race. Keep that in mind as you try to imagine what it means to be ultra-hyper-super-friends with one - Jillian D. Esquire III.

as i sit and listen to the maniac kids yelling outside my hotel/apartment window, i can't help thinking of the days spent in victoria, hunkering down with a good larvae documentary, controlling conversation, and observing the best damn popcorn making south of anywhere. what i am trying to say, friends, is i miss the living jesus out of you. also, thanks for the ode and thanks for the incredible hospitality. you two make me want to turn back time to relive all the moments we've had together three times over. too much too soon? let me know. imtiaz -- you are more than invited to come up here and explore the crazyness that is nunavut. i can't promise the kind of hospitality only michael and erin provide, but i will donate my bed and erin knows how big that offer really is.