Breaking in the tent

A couple of weeks ago we went camping on Sidney Island. We took a boat from Sidney with our camping supplies, loaded everything up into a wheel barrow (provided by the park), and walked our goods to the camp site 10 minutes away. We only spent one night there, but many adventures were had: Michael got lost; we tried to walk around the island, which happens to be quite big, and failed; we got caught drinking alcohol on the beach after I asked Michael, in my outside voice, whether he had brought beer for Ananda from our tent - the guy who enforces the no-drinking rules happened to be right behind him; we saw Canada Day fireworks across the water in Sidney (anti-climatic, but there you have it); we took many photos; we ate cold tofu dogs for supper because there were no fires allowed (is it really camping if there's no fire?); and we got some exercise, despite protests from Zoe and me, when we walked to the end of Sidney Spit, a long sand bar that extends from one end of the island. There we enjoyed our very own white sand beach before catching the boat back to Vancouver Island. It was such a lovely excursion, and I hope to have more of them before summer is through. My parents bought Michael and I a MEC tent last year, and we've only been able to use it three times, to date. We're new to camping, and we still have to iron out a few problem areas, like how not to freeze to death when the sun goes down. I think we have to give up our double sleeping bag and accept the fact that individual sleeping bags, though antisocial, keep you warmer - and one day we'll give up our inflatable air mattress, because frankly, it's a little embarrassing. 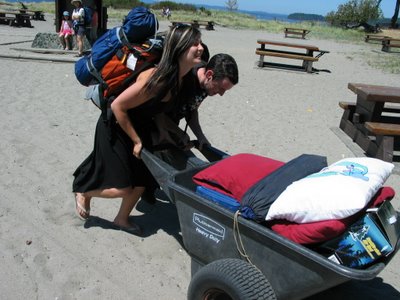 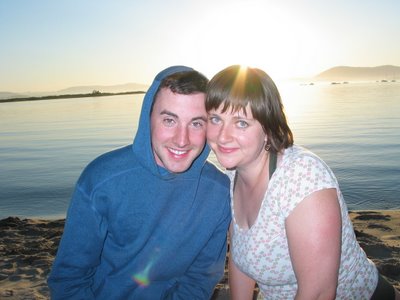 first of all...we're so going camping when i get home. but i can't say i want to go somewhere where i couldn't make s'mores.

secondly...never give up the double sleeping bag! skin to skin contact is the only way to stay warm. it's how you save someone who's dying from cold ness. just make sure you have a few layers of polar fleece between you and the sleeping bag.

robyn's right about the double sleeping bag. i guess your costco deal wasn't such a deal after all, huh? huh?

i'm just jealous because i don't have any camping supplies at all.

Well, it's true that when we were camping with friends at a cabin near Thetis Lake last weekend, Michael and I were so cold that we snuggled like we were on our first date (well, I guess most people don't snuggle on their first dates, but we did...). We each thought the other was the warmer one, and truthfully, we were trying to steal the heat.

Nice picture of you two. You still look so much in love after all these years. Or perhaps, like you said, you were just trying to keep warm.

A couple of weeks ago I went camping for the first time in years. It was much easier than I thought it would be. (Although I did leave all the actual work to the real men - making a fire, pitching the tents, hunting, cooking, etc.) And more comfortable than I'd expected. We slept on Therm-a-Rest sleeping pads, which are warm, comfortable, compact, and easy to use!

It would be great if we had a chance to go camping when you're back in SK. And don't worry about being cold. The best way to keep warm is an imti sandwich. As good, if not better, than s'mores, and without all the calories.

There's a trick to sleeping bags. They are all rated for different purposes. You should check the labels on the sleeping bag to see the temperature rating. Maybe you could get a warmer sleeping bag and zip it together with one of the not-so warm ones. That way you only have to buy one new sleeping bag.

One more thing! My dad has one of those tiny polar fleece sleeping bags that he uses for motorcycle trips. He says it's super warm. They are cheap too!

First of all...Could you and Michael be any cuter?! No! I don't think so---soooo cute!

Second...I'm going camping this weekend. My family is well-versed in a sort of glamour camping (if you can call it that). We eat really fancy meals like blue marlin burritos (I'm not joking). It has become almost a tradition to attempt to cook gourmet food on our little Coleman stove. We sleep in a tent and don't wash for days, but we eat well!

I always find that putting a pair of thermal underwear on under my pj's helps keep me warm. Maybe it's just me, but I always end up with a really cold butt while sleeping outside. I cut the thermal underwear off at the knee for comfort and so that I don't overheat. I recommend it.

And keep the double sleeping bag---why not!

I am a very experienced camper and I have to say that you must keep the double sleeping bag and ware no pjs whatsoever, the more bare skin touching the warmer you will be. Next ware a toque and have an extra blanket to wrap around your necks so no air can get in or out of the bag. You will be so toasty you won’t believe it.
Emily

i can't believe the overwhelming support for the double sleeping bag! i think we'll just bring extra blankets around next time and see what happens. I also think the thermarest would be a good investment because it's meant to insulate you from the ground - which can be cold when your tent is set up on a rock.