Three is the magic number

These three photos wrap up our last three stops in Italy, but don't despair. Last weekend, with help from some strong coffee, Michael and I wrote up a whole bunch of top five lists regarding different aspects of our trip (i.e. top five food experiences), and you can expect to see those in the near future. And then there's Paris to write about too. 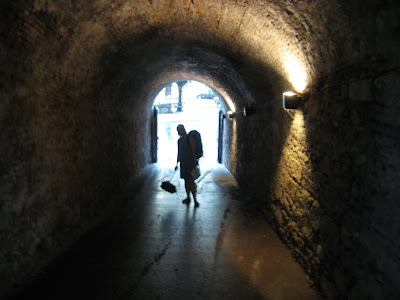 This photo was taken in Lucca as we were heading to the train station. The walls surrounding this town are the main attraction, so I thought I'd provide you with a unique vantage point.

This was one of the most relaxing towns we visited. Instead of hustling around museums, we did other, better things, like riding bikes; we were able to bike around the top of the town walls, which are so wide they boast parks and tree-lined pathways, and we also saved our sore feet from the treck to the modern conveniences of our apartment, like air conditioning and television (the Olympics need no translation, friends). 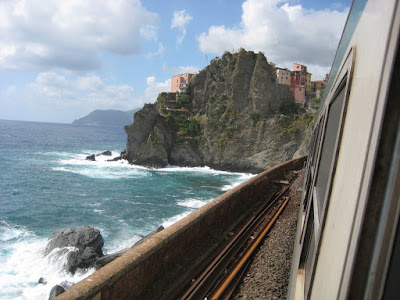 I realize that you can probably find this photo a thousand times on the Internet, but there's a reason for that. Isn't it pretty? We were there! We didn't stay in that town on the cliffs, though. We stayed in Vernazza, which I hear is the favourite of the five Cinque Terre towns. I loved it becuase we had a balcony that looked onto the main street; figs, pizza and wine were consumed with an entertaining view.

The funny thing about this leg of the journey is we didn't walk between the towns, which is what most people do when they go to the Cinque Terre. I hear you can walk from the first to the last in five hours. Instead, we spent our time at the nude beach near Corniglia. That was an adventure too, and it involved some hiking, so I'm not too ashamed of myself. We had to walk through an abandoned train tunnel (where locals took cover during the war) to get to the beautiful black pebble beach, where we were tossed around by giant waves. It was a highlight. 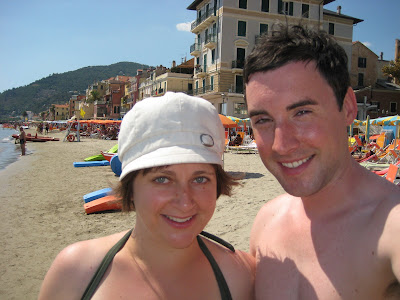 I can barely look at this picture right now. Why don't I live in Alassio? Why don't we all live there, friends? We didn't get enough beach time during this holiday, but what we did get was pretty good, even if it did cost us a pretty penny to rent beach chairs and an umbrella on this beach.

This town was a wild card since we couldn't find information about it in any of our guide books. Michael decided it was worth the risk after he read about it online, and I'm just sad that we couldn't stay longer. This is where you should go if you want a beach holiday in Italy. The town was pretty boring, even though there was a week-long beauty pageant on while we were there, but the sand is white and the water is warm. Sometimes that's all you need.

Email ThisBlogThis!Share to TwitterShare to FacebookShare to Pinterest
Labels: Travel

Mmmmm, so lovely! Thanks for sharing this experience Erin. It looks like you had a beautiful, delicious and wonderful time.

Also---you two are so freaking cute on the beach! Cute!