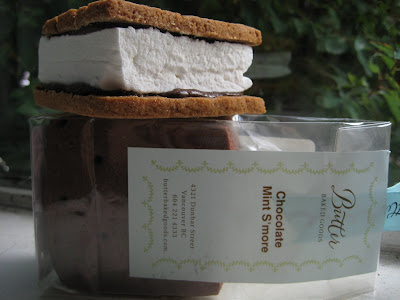 While I haven't been producing much lately, I HAVE been making tentative plans to make things. Marshmallows, to be exact.

First, Emily at Inside a Black Apple featured these in a cup of hot chocolate. They look unbelievable.

Then, I found the smores pictured above at my local grocery store. The smores were tasty (and pretty), but they inspired me to make my own marshmallow treats, more than anything else.

Anyway, I've checked out plenty of marshmallow recipes, including the Martha Stewart recipe that Emily used, but I have yet to find a gelatin-free recipe. Is gelatin really that magical?

Next time I'm in Victoria I've got to buy some of those S'mores! Also, I'm happy to taste-test any marshmallow creations for you. I'm hoping to be on the island sometime in early November, so if you need a hand making treats I can make myself available.

I know there are vegan marshmallow recipes out there, but I don't know what they use instead of gelatin. Carageenan? Am I crazy?

I shall keep you posted.

Brie, if you can't make it over to Dunbar for the smores either, you can find Butter treats at Capers. Or we can eat them together when you visit.

And what, may I ask, do you have against Gelatin?

Is is the whole "pigs feet" thing? Is that even true? ... Quick wikipedia check confirms that pigs are often involved; however, it is not their feet, but their skin, that is used.

Also, there was a note about Kosher gelatin possibly being made from vegetable sources, and I bet you could find some of that around here, if it was the whole pig thing that was buggin' ya in the first place.

Chocolate mint smores wtf?! Smores have been my favourite since I went camping. I am totally going to Capers tomorrow. I haven't been back to Butter since my one visit, which I can't believe.