Um, I saw The Cure in Vancouver last night. I flew on the float plane after work, met Jillian for supper, watched the concert, stayed with Jillian at her hotel and flew home this morning. I'm tired, but it was worth it.

Read this Georgia Strait review if you want more details about the show. If you want some personal details, you can know that I cried when they played Close to Me during the second encore. It was to be expected, I guess.

This is a little video from the show:

This is us after the show: 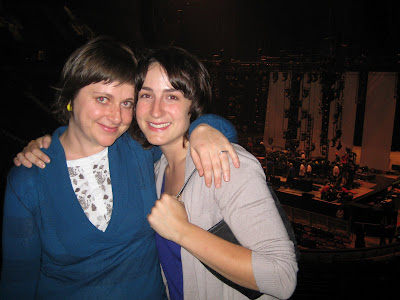 I wish we had a picture with Sarah and Lydia because they were there too, but they were in better seats that didn't look down on Robert Smith's bald spot.

Email ThisBlogThis!Share to TwitterShare to FacebookShare to Pinterest
Labels: Friends and family, Music

the radio is full of new cure songs at the moment here. i like it.

Now I am listening to The Cure AGAIN. This seems to happen every time you mention the show was great. I'm glad it was great!