Back on the bike 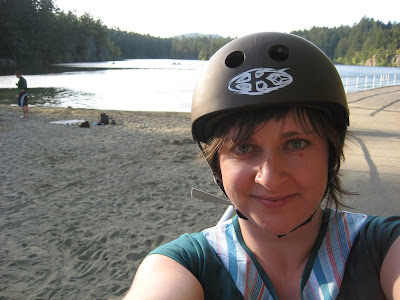 This is me at Thetis Lake. If you guessed that I biked there (that's not just any old hat), you guessed right. It's time for a new header! Except I think I'll wait until I complete the other plans because I need to buy time. 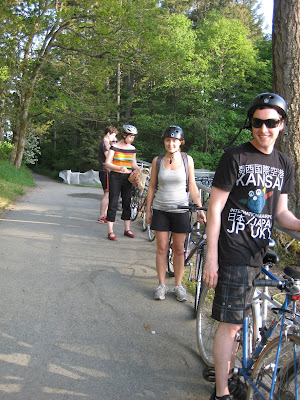 I didn't bike out to the lake alone. No sir. I was in a bike gang! I've fantasized about being in a bike gang for many years, but I've rarely had the opportunity to bike with more than two other people at one time, which doesn't constitute a gang as everyone knows. On Saturday the stars aligned, and six of us set out for Thetis en masse. It was empowering, especially during the parts where we weren't on the Galloping Goose Trail. Also, the enthusiastic high fives were a nice touch. 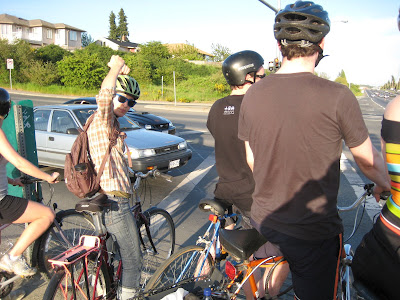 It took 45 minutes to bike each way, and we went for a freezing cold swim in between. Bex thought we were ParticipACTION poster children. 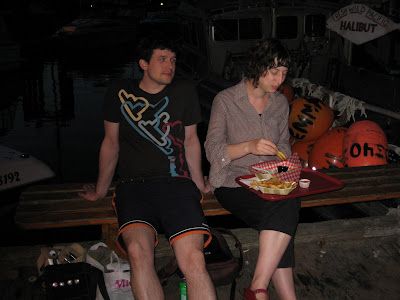 We refueled with fish and chips from Barb's Place at the end of the day, even though the cruise traffic meant a long wait (and a bike ride home in the dark). All in all, it was a perfect summer day. I think we were all a little nervous that it would be the only nice day this year (thanks to Claire Martin and her fear mongering), but things are already looking up for another trip this weekend; my follow-up tentative plan is to make the journey a weekly occurrence.

I'm so impressed! I'm such a horrible bike owner. I like riding my bike, but I can't handle the Vancouver traffic. It really takes away all the fun. Still I'll pump up her tires and get her out this summer, I swear!

Get with the action!