Michael and I celebrated our anniversary on Friday. It's been 11 years since we met at Angie's 18th birthday party in Rosetown. Sure, we're not married, but you'd think the sheer length of time would give us some sort of official status in his grandma's eyes. Nope. Only married couples can sleep together in her house. I can't figure out if that is a reason to protest marriage or a reason to just get married already.

We celebrated the anniversary by going to Zambri's for dinner. Our meal was unbelievable and I'd like to go back soon, especially because it's in my neighbourhood. First, the fried mozzarella appetizer is one of the best things we've ever eaten. It was served on top of minty orange pieces and with four types of compotes for dipping: cherry, chili, fig and date. Second, there was some luxurious type of bacon in my pasta. Third, the lemony aperitif that we drank before the meal was delicious and strong, making for some wonderful dinner-time conversation. All of those things made our anniversary great (if you didn't catch them the first time, those things were cheese, bacon and booze).

But do you know what's more impressive than 11 years?

My parents celebrated their coral wedding anniversary on Nov. 25, 2007, and since I never wrote about it then, I'm doing it now. Mom and Dad, your relationship has provided me with a pretty good example of relationship longevity. Keep up with the good example!

I didn't buy my folks a coral present. Instead, I gave them one of my favorite books ever: Learning To Love You More by Miranda July and Harrell Fletcher. It's a very touching coffee table book about shared human experiences and creativity. The book features selections from a website that challenged people to complete and submit assignments in order to explore the value of creative constraints. The assignments were usually silly and/or simple, but they had emotional results. I never knew about the website, which is no longer posting new assignments, until Sarah Mundy told me about it in a comment on this blog.

After musing about how I should do something more to acknowledge their momentous occasion, I realized that the answer was staring me in the face. The cover of the book features a photo of a couple kissing, which was captured for Assignment #39: take a picture of your parents kissing (or at least hugging). Do not send us an older picture of your parents, we are looking for a new picture taken specifically for this assignment.

I realized that I had to complete the assignment, and I convinced my parents to help me out. After some shyness and a few awkward angles, I got the picture I wanted: 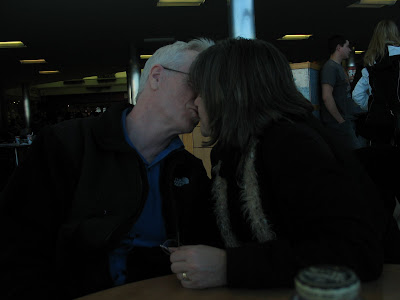 This photo was taken in the Saskatoon Airport on January 4, 2008. My parents were dropping Michael and I off for our trip back to Victoria. Then I took a picture of them. Kissing.

First of all, Happy 11th Anniversary! I'm sorry I didn't remember or I would have brought you a wee gift to mark the occasion (although I see you already had the basics covered in the cheese, bacon and booze areas). Congrats!

Second, I'm very pleased to learn that my birthday is on your parents anniversary. I probably knew this before but forgot (I have a horrible memory). The photo of them is adorable.

Happy Anniversary to you two! I like how you celebrated (fancy dinner) and I think it's great that you can still enjoy a tipsy conversation with Michael, even after 11 years of tipsy talks!

And to your parents - big congrats! They are a good pair, very solid in their togetherness. I love the idea of a coral anniversary. Pretty! Who came up with those year=materials things anyways?

Lots of love to all of you,
Erin C.

My parents have been married for almost 30 years... and they are still really affectionate. When I was younger I used to freak out when they would kiss in front of me... you know how it is when you are 8. Kissing is so gross! It's only now that I'm older that I realize how amazing it is that they still have such a great relationship after all these years. I suspect you and Michael will be the same way...heck, you're almost halfway there! Too cute.

"Cheese, Bacon and Booze" should be the title of the relationship book that you and Michael should start writing! Do it!

That picture of your folks is so sweet. So so sweet.

Wikipedia tells me that the original 1922 edition of Etiquette in Society, in Business, in Politics and at Home by Emily Post contained suggestions for wedding anniversary gifts for 1, 5, 10, 15, 20, 25, 50 and 75 years. Other years were added in later editions and publications; they now comprise what is referred to as the "traditional" list. Generally speaking, the longer the period, the more precious and/or durable the material associated with it.

I think I used to have a copy of that book that I found at a garage sale.

I think Emily Post would approve of a relationship book called Cheese, Bacon and Booze.

I looked up the same thing on Wiki. I like the traditional ones much better than the modern. How gives a frick about silver holloware when you could get something made of tungsten?!!!! Though it seems strange to me that oak and granite are higher up than platinum. "Happy 90th Anniversary honey, here's a granite countertop"?! If you make it to 90 (who has reached that?) years of marriage, you deserve a damn CROWN of GEMS.

If I ever get married, I'm totally taking up this tradition.

it seems like the gifts should get more precious but LESS durable as they go on. the oldest living tortoise, or an extravagant souffle. what is a 90-year-old wife supposed to do with gifts that last for 100 years?

or wait, the gifts should get more HAZARDOUS. fancy drugs, or very fancy yet quite toxic food. when i'm 90, i'll be dining exclusively on delicious things that give you cancer or make you infertile.

my friend laurie said that when her mum went into palliative care, she declared that she was only eating dessert from then on. i think that's the right idea.

I'll take either Erin's suggested crown of gems or a pack of multi-coloured Nat Shermans.