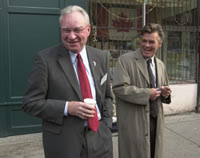 I heard my arch nemesis speak on campus yesterday. Senator (and former Vancouver mayor) Larry Campbell spoke to a room of 15 students about the merits of the Liberal Party. Scratch that. He spoke to us about the flaws of the Conservative Party. And Jack Layton.

I attended the speech to give Larry a chance to convince me that his pop culture cred is justified, but I came away more disappointed than ever. He rambled for 45 minutes about a variety of subjects that all ended in the same conclusion: "the members of the Conservative Party are the most immoral group I've ever met in my life." Also: "this bunch is certifiably nuts." Hey, I like slagging the Conservatives as much as anyone, but I wanted more meat and less insults. Don't tell us things we already know! Give us some Ottawa dirt!

He also threw a few insults at Jack Layton ("I blame the NDP for our current government") and almost giggled when he described the challenges the NDP will face in the next election (for example: competing for the green vote).

I like that Larry Campbell isn't your average politician, but I don't like how childish he behaves. His temper tantrums at Vancouver City Hall garnered amused media coverage, but when is it ok to bully your co-workers? I'm sure he's done some things in his life that are worthy of praise (Da Vinci's Inquest - a CBC show based on his life as chief coroner - was popular for a reason), but he's no political saviour in my books, even though he acknowleded International Women's Day at the beginning of his presentation. It'll take a lot more than that, Larry. Try going back in time to fix the mess you left when you dropped out of municipal politics to become a senator.

Email ThisBlogThis!Share to TwitterShare to FacebookShare to Pinterest
Labels: Politics

My mom used to have a crush on the guy that played the character based on Larry Campbell. Guess I'll have to tell her he's guilty by association and shall no longer be an appropriate crush. Thank goodness you enlightened me on his dumbness.

I have never quite worked out who Canadians actually vote for as there seems to be unhappiness of the Liberals, NDP, Conservatives, Bloc Quebecois and anything else. By rights the Green Party should be the top potatoes.

I am not familar with this particular polictian. However I lived in Stephen Harper's constituency during his last general election campaign and the propaganda wasn't pretty there either.