Monday Magazine got me. I read this weird editorial yesterday and was immediately excited about the possibility of taking an airship to Vancouver. Who wouldn't be?

Tolo de Abril Airways, which has had great success flying tourist-laden airships along Portugal’s Algarve Peninsula for the past decade, recently announced a joint partnership with B.C.’s now-even-greener Campbell government to offer an environmentally friendly way of bringing travelers to our shores. 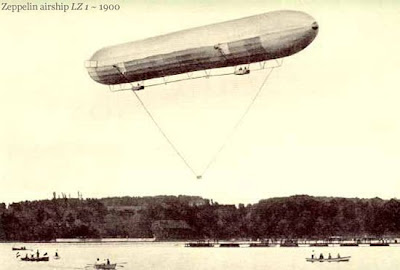 I sort of knew something was up, because the article was so ambiguous, but the concept of airships was so cool that I ignored the lack of details and got on board. I wasn't alone. Michael's imagination was running wild until I googled the company this morning.

When the search didn't provide any useful results, we started to clue in. Then we realized the test flight was scheduled for April 1st. I feel so deflated! And paranoid! What if the wedding I'm attending on Sunday is also a joke? Don't kick me while I'm down, Sarah and Galen. I don't think I could handle the disappointment.

If it's any consolation, as I was reading your post I was getting somewhat excited about the prospect of flying in an airship to visit the island. Suckers!

Don't feel bad Erin. I was briefly taken in by Google's "tISP" offer, involving toilet-based free broadband service, before I remembered that April 1 is the internet's favourite holiday. I would fly in airships all the time, given the chance.

Michael was taken in by another Google joke: the offer to mail you paper copies of all of your emails (and photo attachments) for free! I had to remind him of the date eventually, but it was fun to see him get all hot and bothered about such a stupid idea.

Ha ha. You two are so charmingly gullible. Airships.

That said, as I was reading your post, I was thinking to myself how I'd be so proud of living in B.C. under such an environmentally progressive government.