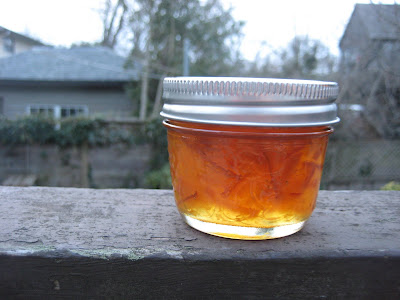 I'm not sure what possessed me to make marmalade this week. It was a strange confluence of things: an article here, a new pile of oranges in the store there, and all of a sudden I was making plans!

I used this recipe, which was well reviewed, but is also apparently a bit easier than a lot of marmalade recipes. Some seem to have steps where you scrape the pith from the peel and are in other ways much more meticulous than this one. So that's good news for both of us! 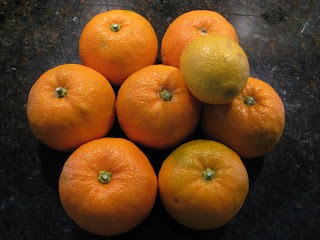 Seville oranges are pretty uncharted territory for me. I've never bought them before, but they are the traditional marmalade fruit of choice. They are only available for a very short window each year, though I read in a few places that you can freeze them and then thaw and use them later. Apparently some people even prefer this method. I have two left over that I might put in the freezer, with the optimistic idea that I'll test this theory out myself some day! I will keep you posted.

Tell them how they taste, Jen! Well, they taste pretty bitter and gross. Surprisingly so. When I measured the sugar for this recipe I was having a hard time imagining that so much sugar was necessary, but it was! This marmalade is by no means too sweet. The peel still has a bit of a bitter kick, so: mission accomplished?! This marmalade experiment is a prelude to a run at my true love of jams and preserves: lime marmalade. This process was not hard, and the results are definitely in the realm of what I would hope. Less modestly, it's really good!

Jen, what?! I had this weird craving for marmalade on Friday, even though I don't think I like the taste, but I like how it looks and the idea of it. I craved it so much I came *this* close to buying a jar of Bonne Maman that was on sale, but told myself I have too much (homemade) jam in the fridge already.

Then Everybody Likes Sandwiches posted a recipe for marmalade chicken yesterday, and now this?! Marmalade. Is. On.

The bittersweet thing that marmalade has going on is really quite intense. I haven't eaten much in my day, but I liked this batch.