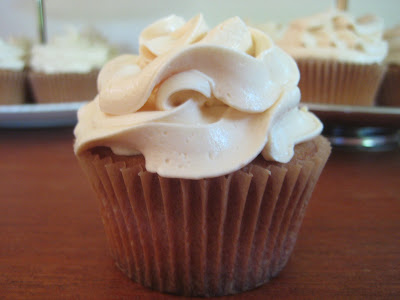 It was Jen's birthday in August, and I almost made her the same chocolate cupcakes with malted icing that I made last year, but then I stumbled upon a recipe for salted caramel cupcakes, and there was no turning back.

I usually don't take on complicated recipes (though Smitten Kitchen's chocolate whiskey and beer cupcakes and root beer float cupcakes are constant temptations), but this one was reasonable, especially because I opted not to add the extra decoration at the end. It's not as simple as making a cake and icing it, but if you give yourself plenty of time, and if you have a few WireTap podcasts queued up, you'll find that putting caramel into each individual cupcake isn't such a big deal. And it's totally worth it.
Posted by Erin Riley at 11:50 am

The dish looks delicious, I want to try some of that one of these days. www.gourmandia.com and www.gourmetrecipe.com also have attractive recipes that you’ll surely love!