A report on Ottawa 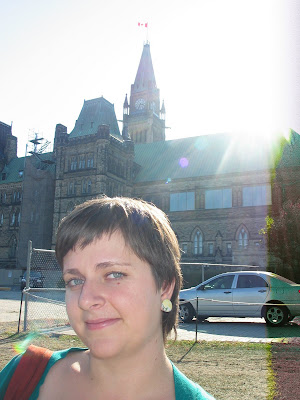 I like Ottawa. I'm not sure that I'd want to live there, but I like it. The city lost points when the PM didn't meet us at the airport, but it gained points when Michael pointed out that John Manley was on our flight to the capital city. We made him nervous while we giggled and pointed at him while waiting for luggage together.

We didn't do any of the wonderful things you suggested, except go for a drive in Gatineau Hills, and the only reason we did that is because the wedding was at a ski chalet in the Gatineau Hills (I was in Quebec for the first time!). It was as beautiful as you'd expect at this time of year. Michael said he wasn't impressed with the fall colours, but I think he felt their goodness before the trip was through.

Museums need more leisure time. Am I right? That said, I'm intrigued and I really want to go back and check them out sometime. The Diefenbunker? Awesome. Also: the Art Gallery looked amazing from the outside, as did the Civilization Museum. When I finally visit Montreal, I'll stop by Ottawa for the museums.

Parliament Hill didn't disappoint. In fact, I think Michael, Imtiaz and I were all pretty impressed by the magnificence of the buildings. We don't have old stuff like that on the west coast (uh, except for the legislature). When Michael saw the line-up for parliamentary tours, he said it was just like Disneyland.

We went to Ottawa for Nathan and Cindy's wedding, and it was really lovely too. The weather didn't work out, but everything else was perfect. The ceremony was short with lots of cute music: Badly Drawn Boy, The Cure, Nathan's mom and brother. The dinner was traditional Thanksgiving dinner and the wedding cake was a tier of cupcakes: yum. None of the speeches were inappropriate and the slide show was really touching. I want to get married just so I can put together a similar slide show. After all of the formal stuff wrapped up, we danced until dawn. My hips were hurting as we climbed onto the shuttle back to the city. I tried to take pictures of the dancing, but they never capture the moment, do they? If you want to see other, better pictures, check out the ones on Flickr or Facebook. None of those are as good as the patriotic one in this post though. Am I right?

are wedding slide shows a new or old addition? the weddings i was lucky enough to attend years back were absent of moving photographic walks down relationship memory lane...but the ones i've attended recently (all 2 of them) did have slide shows to entertain before the food. i certainly want one...i'll be honest, i'd make one right now for my non-birthday if i wasn't having a lazy sunday.

can we make a tentative plan to drive across canada some distant summertime? it makes me a little sad that i've seen more cities abroad than i have of my own country.

I'm sort of hoping that *if* I get accepted into the Co-Op program at school I'll end up in Ottawa. I can only imagine how amazing those galleries and museums are inside!

I just got back from a conference in Ottawa. I walked around the Parliament buildings and thought of you! I did some of my own suggestions: pints at the Manx (and Darcy McGee's, where the politicos hang out), a visit to the Nat'l Gallery, a walk by the river. Lovely. Hope all is well with you and school is rolling along.