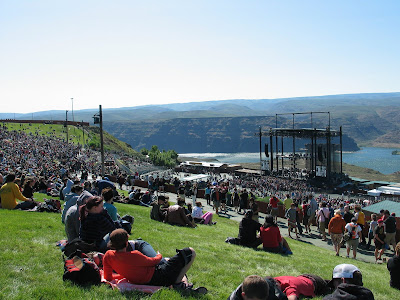 When we moved to Victoria, Jillian thought I wouldn't be able to hack it. She thought I would go through concert withdrawal. I think her aversion to concerts (which I totally understand, by the way) warped her perception of me and my live music habits. That said, I do love a good show, and I've enjoyed a recent concert fix: we attended the Sasquatch Music Festival last weekend.

Normally I'm not a fan of big concerts, but the line-up for this festival made me sweat. Manu Chao! Bjork! The Arcade Fire! Sarah Silverman (not a band, but whatever)!

The Arcade Fire were my favourite. I sang out loud. Michael too. I danced silly and felt like a super star; it reminded me of that first Hidden Cameras concert I went to with Ananda. I liked The Arcade Fire before, but I didn't love them. Now I love.

Bjork was a powerful yellow starfish on a giant stage. Was it a rave? Maybe. I'm ok with that.

Manu Chao is a punk band, apparently. I didn't know. I was sad when I recognized lyrics to favourite songs: they didn't fit with my memory. Lots of people seemed to like the show though, and it was satisfying to see the team in person.

Sarah Silverman? What happened? You appeared once with a lame joke: you pretended (?) to forget the name of the band you were supposed to introduce; you read Manu Chau off your hand in an exaggerated fashion; you skipped off the stage and never came back. Pitchfork reports you may have been sick. Boo!

Other goodness included catching the last song by Patrick Wolf and keeping warm with the Spoon fans.

During the road trip part of the weekend, there was a lot of talk about favourite concerts (MIA/LCD Soundsystem, Hidden Cameras, Belle & Sebastian/Jonathan Richman) and bands we hope to see one day (Camera Obscura, The Shins, Animal Collective). Combined with the thrill of seeing a good show, those conversations made me thirsty for more! I don't want to move back to Vancouver, but I do hope I make enough money to skip over for shows more often. I don't want to miss Camera Obscura next time around.

I always though Manu Chao (or whatever) was a sort of hip-hoppy band from South America---am I totally wrong? If I'm wrong who am I thinking of? I'll have to consult the CD rack.

The weather and setting looks like it was beautiful. I've never seen a concert at the Gorge, but that sunset shot is enough to make me wanna.

That stinks about Sarah Silverman. When we saw her she was really great. Maybe she was sick because she realised that she accepted the offer to pose in Maxim. I know that made me a little bit sick.

The scenery was beautiful, but the Sunday weather licked: super windy and cold. Also, we all had bad allergies at the camp site!

Manu Chao is Spanish. I would describe the music as fun and funky. Not punk!

Wow, what a beautiful setting for a concert! I'm glad to hear other people don't like concerts - I get too distracted and end up just looking at what people in the crowd are wearing.

All I know of Manu Chao was that you wanted to play them when Remy was coming over to pick me up for our first date. You thought Manu Chao would say "cool yet approachable" but I argued that playing music by a band I'd never heard of wouldn't have the desired effect. Then I suggested Rufus Wainwright and you said that all straight men hate RW. And you are right!

Qualification: I now know straight men who love Rufus! They exist, and I approve of their taste!

There is nothing better than seeing a good concert, I say. It's always so satisfying when you see a show and it exceeds your expectations. As for me, I'm still getting over the excitement of seeing The Police last night! It was kind of a big deal for me, since I've been in love with them since I was about 4. It was totally worth the wait.

I'm glad you had fun at Sasquatch! I was a little jealous when I found out you were going. It looked like good times.

I too, was/am jealous that you went to Sasquatch. But I'm glad you had a great time.

I LOVE concerts. I love the energy that doesn't translate from a recording.

But day-long outdoor concerts are a different animal. Too much of the day becomes about survival: making sure you're not getting burnt or sunstroke, not totally losing your friends, getting enough food and water, braving the toilets and not freezing once the sun goes down.

I too attended Sasquatch on Saturday, for 13 hours. When the bands were bad they were horrid. I was surprised to enjoy Bjork the most. (I don't think any Arcade Fire show could top the time I saw them at The Commodore.)

I only saw Sarah Silverman go on about not taking a shit in some shitty band's trailer who subbed for M.I.A. I know of her but am not familiar with her and left rather unimpressed.

Hello, organizers, when M.I.A. couldn't make it you should have bumped the Beastie Boys to the main stage - who cares if they were going to be on it the next day.

Camping Friday night was one of the highlights because all the kids in the campsite were sooo excited. Big waves of whooos would roll around and it was kinda sweet.