The truth about Cadbury Crème Eggs* 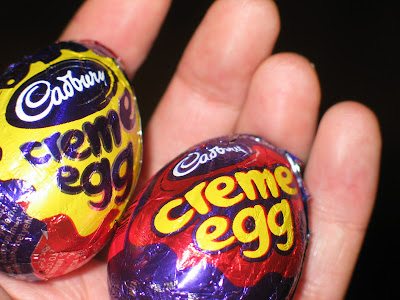 Controversy 1: Size
I only became aware of this issue when I did some cursory Internet research about Cadbury Crème Eggs a couple of weeks ago. It seems that the American egg became smaller last year, and the issue exploded online after actor BJ Novak (he plays Ryan in The Office) complained about it on Late Night with Conan O'Brian (the video is no longer available on YouTube).

At the time, this is was the response on the Cadbury Schweppes website (Internet archive):
Why has the size of the egg changed?
It hasn't - you've just grown up!

This is what the Cadbury Schweppes website says now:
If you're eating a Cadbury Crème Egg in the UK or Canada - nothing has changed, they're the same size as ever. However, in the United States, our business partner, Hershey, elected to reduce the size of the crème egg.

Controversy 2: Taste
It was obvious to me that a taste test is the only way to discover the true difference between the British and the Canadian Egg: 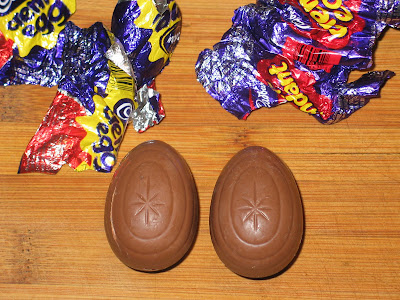 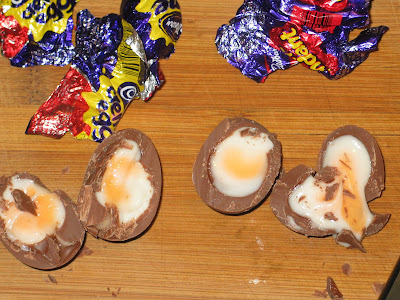 No, I didn't eat two eggs in one sitting. I needed a second opinion, and Michael grudgingly accepted the challenge.

We determined that the British egg (on the left) isn't as sweet as its Canadian counterpart. I'm sure this has a lot to do with the British preference for more cream and less sugar in their chocolate. Also, the filling isn't as runny. The Canadian egg has an icing sugar flavour, and not surprisingly, the chocolate tastes/feels a little waxy.

I'm sure you won't be shocked to find out that I prefer the British egg, but I have realized that the quality of the product has little to do with my opinion. These are the eggs that used to be available in Canada, and the flavour is all nostalgia for me. I can't remember the precise year, but at some point in the 1990s the British eggs were pulled from our shelves. My infatuation with the eggs died that year. I don't think it was resurrected until I happened to be in Ireland over the Easter holiday in 1999, and my cousin Keren showed me the light. The British eggs taste like my childhood. Now I haunt the afore mentioned sweet shop every spring, waiting to fill my annual craving and revisit the past.

Michael, on the other hand, prefers the Canadian egg. I imagine this has something to do with childhood nostalgia too. Sometimes you just like bad chocolate. Like those chocolate bunnies from the drug store. You know? Also, he claims the Canadian egg has a better aftertaste.

Email ThisBlogThis!Share to TwitterShare to FacebookShare to Pinterest
Labels: Food, Procrastinating on the Internet, Tentative plans

I'm a Mini-Eggs girl. I find the Creme Egg a little overwhelming, so I was happy when they released mini Creme Eggs a couple of years ago, although they're not as fun to eat!

When it comes to chocolate, Cadbury's is the best regular ol' chocolate. I think we're lucky to have it in Canada even if it's not as nice and creamy as the stuff from the UK.

Also, I think when I'm in Victoria a trip to the sweet shop might be in order!

I knew it! The eggs have changed. It isn't just me.

I remember the filling being not that runny. I also thought I was just getting older and not tolerating the sweetness as well as I used to. This change turned me off Creme Eggs and onto Mini Eggs which I now worship by the 1kg bag full every year.

I need to get my hands on one of those British versions. Seriously.

And Cadbury does make the best regular chocolate. I can't stomach Hersheys. It just tastes wrong.

i had my first creme egg of the season yesterday. luckily for me, it's not a trip to the specialist shop to get the good ones. they're EVERYWHERE! the reason i like the british eggs more than the canadian eggs has something to do with the melting factor. i don't remember the canadian ones melting in my hand....maybe it's because i ate them too fast. but i do remember the first time i ate a creme egg over in england. the chocolate melts in your hands and mouth as you eat and lovingly glues your tongue to the roof of your mouth. it's just so creamy.

i want another one now.

I think you're right about nostalgia driving preferences when it comes to this! It's the reason I like LOTS of things against all logic!

Like Brie, I'm more of a Mini Eggs girl. I don't grab a Creme Egg when I see them as spring approaches, though MINI EGGS! I love them. You can eat them so many ways! I like to have some with tea.

I don't like that they've expanded Mini Eggs into Christmas though...Christmas eggs? That makes no sense. And they are NOT as great in the comparatively harsh colours of RED AND GREEN!

I also enjoy having Mini Eggs with tea. Generally, I like to suck off the shell and then let the chocolate melt in my mouth. Also, how great is the vanilla smell when you crack open the bag?! Yum!

Brie. YES! I went into a whole paragraph about sucking vs. biting thing, but deleted it out of some mixture of shyness and shyness. But yes, this is precisely the Mini Eggs Experience!

Opening the bag is also a totally gratifying thing!

Hey, Cakespy just wrote about Cadbury creme eggs too. I need to go to Shoppers and buy some now.